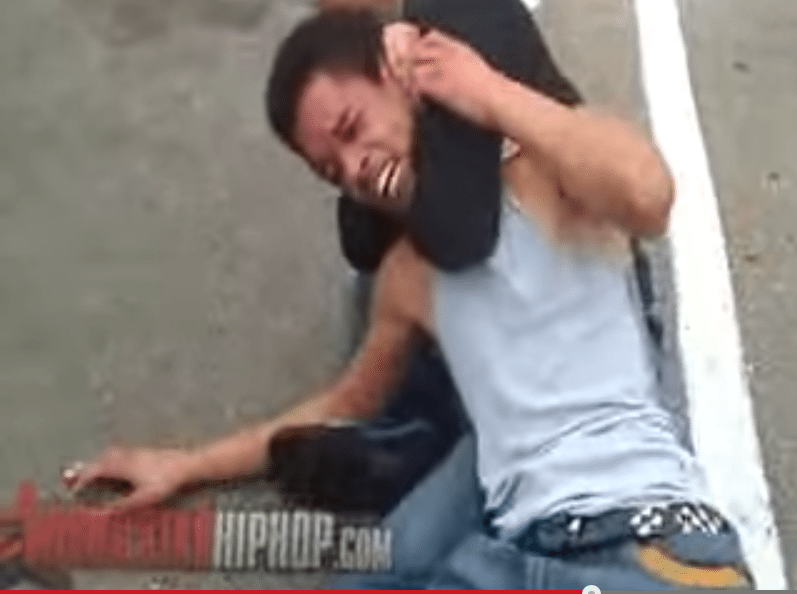 What can I say? I love to watch street fights on youtube.com and Worldstarhiphop.com. My reasons for watching street fights ranges from pure entertainment to seeing how verbal sparring can escalate to violence to just wanting to observing the level of technique used in street fighting. I like to observe how the fighters hold up their hands, if they throw technical punches or looping overhands and hooks and what happens if the fight goes to the ground. The old Gracie saying is that 70% to 80% of fights wind up on the ground.

In a clinch situation on the feet or if the fight goes to the ground, knowing basic Jiu Jitsu, wrestling, and grappling techniques like guard retention, over hooks, under hooks, and submission defense can mean the difference between walking away with a few bumps and bruises or going to the hospital with a concussion or head injury.

While watching these fights is a guilty pleasure and allows me to think through what I might have done differently in the event I am ever forced into a self-defense situation, it also highlights the dark side of humanity. I have seen unconscious men take extra punches and kicks to the head which could cause long term brain damage or even death. This makes learning and understanding basic self-defense concepts taught in Jiu JItsu on both the feet and the ground even more important for men and women of all ages.

I want to take select street fights and self-defense scenarios and show how concepts learned during the first 2 years of Jiu Jitsu could have been effectively used for both defense and offense in a street fight and self-defense situation. I am applying my thoughts from my 3-year of training and Blue Belt ranking to this series. I would like to encourage feedback, thoughts and insight from others in the comment section at the bottom of the page and/or on our Facebook page. I am hoping this series will help further educate people on the effectiveness and importance of Jiu JItsu and grappling in the streets and maybe help people who might one day find themselves in a similar situation.

In this first edition, I would like to breakdown a quick 2 minute street fight between 2 teenagers that I found on youtube.com. The fight incorporates both stand up striking and grappling where both teenagers show a lot of aggression, but very little technique. The fight takes place at an apartment complex parking lot on a black top surface which is very dangerous in the event of a knocked out opponent hitting their head on the pavement or someone getting slammed on their back or head.

The two fighters will be referred to as TT (Tank Top) and BS (Black Shirt).

:35: BS, who is Asian, is in a Bruce Lee fight stance. Fighters step into striking range and exchange a few punches and slaps that do little damage.

Here is Stephen Kesting demonstrating a very practical defense for a headlock.

:50: TT and BS are battling in the clinch when TT decides to let go of the headlock, but keeps his right arm over and around BS’s neck and puts his left arm and hand between BS’s legs and lifts and spins BS for the take down. While being taken down, BS switches his right arm position into a guillotine position around TT’s head and left arm. They land hard on the ground with TT on top in a mount like position, but BS has a potential guillotine grips.

The risk of TT attempting this takedown while being held in a guillotine is that he can be DDTed to the ground and have his neck broken. TT could have done a better job to cut the corner with his right ear touching BB’s back on the takedown to drive BS down to his left side rather than drive him directly backwards. This would have prevented BS from getting his arms in position for the guillotine grips and reduced the risk of TT hitting his head on the pavement.

BS has potential for a guillotine, but is holding both TT’s head and left arm and doesn’t have a guard. There is a brief moment when they hit the ground, where there was space for him to slip his left knee across TT’s waist line and pull TT into his guard, but that didn’t happen.

:55: TT is in position to get full mount on BS, but BS has an under hook with his left arm and has his right arm wrapped around TT’s head and left arm to keep TT’s posture broken down to prevent a series of blows from coming down on him. TT attempts a few blows to BS’s head with his free right arm to soften up BS’s grips. Instead, he should have worked to maintain mount by crossing his feet underneath BS’s butt, base out his left arm to the side and slide his free right forearm underneath BS’s throat and press down to soften up BS’s grips on him.

1:10: TT has mount, but his posture is broken down.  TT decides to stand up with BS still holding an under hook with his left arm and his right arm draped over TT’s head and left arm. TT then violently slams BS back to the ground. This could have caused serious damage to the both of them with BS hitting the back of his head on the pavement and TT DDTing himself to the ground since BS has the guillotine like control of his head. Luckily, BS had his chin tucked in to prevent the back of his head from slamming on the pavement. TT’s head might have hit the pavement since he then gets swept by BS. When TT stood up to go for the slam, BS had the chance to place his feet on the ground and get his hips back to prevent  the slam and get back to his feet which would be a much better position than potentially landing back in bottom mount or getting knocked out from the slam.

1:20: BS is now in full mount and landing blows from the mount on TT, while TT is attempting to cover up and defend the strikes. TT could have bridged forward to break BS’s posture and then clinched BS’s arms and head to keep his posture broken down and prevent significant blows from landing on him. Instead, TT’s instincts take over and he turns belly down to expose his neck to BS.

1:25: BS takes advantage of this opening to cinch a rear naked choke on TT, but he does not secure hooks with his legs or drop TT to the choking side with his hooks to fully secure him. At this point, TT’s is screaming “Hey, let me out.” TT shouldn’t of turned belly down and when he did, he should have tucked his chin and used his arms and hands to fend off the rear naked choke defense.

At this point in the fight, TT has verbally tapped out. However, in a real life scenario, there is no tapping on the streets. If BB lets go of the choke, TT can then quickly recover and resume fighting. It is important for BB to get the hooks and be in a position where if he chooses to let go, he can quickly assume a dominant top position over TT to prevent any cheap shots. For TT, his lack of Jiu Jitsu and grappling skills might have cost him his life or long-term health issues. Unfortunately, there have been cases of people choked to death in street fights or people who have suffered long-term brain damage from chokes being held too long. Learning basic choke defense concepts can help prevent getting trapped in a chokehold.

1:35: Once the choke was cinched, there was still time for TT defend against the choke or alleviate pressure by using his hands to pull down on BS’s arm across his throat. Since BS did not have his head positioned correctly against the backside of TT’s head or have legs hooked in place, TT was able to turn in to the choke and gain top side control position.

1:40: TT has assumed top side control, but is not able to do much with the position. While most BJJ practitioners and wrestlers are conditioned to go multiple 5-minute rounds, the average person who isn’t accustomed to hand-to-hand combat will be exhausted from an adrenaline dump, nerves, and not having the cardio training to punch and grapple for over a minute. Additionally, TT might have been dazed from DDTing himself to the ground and nearly getting choked out.

1:45: BS quickly escapes side control by turning into TT and stands up while holding TT’s head and left arm in an almost inverted guillotine position. He then proceeds to just drop all his weight back on TT to slam him. TT’s head and back hit the cold pavement very violently and he is knocked out cold. BS lands 3 unnecessary shots to the skull of the unconscious TT, which is both wrong and dangerous. The slam combined with the blows could have killed him.

In the final seconds of the fight, TT made two crucial mistakes most grapplers would not make in the same situation. In side control, TT should have gotten chest-on-chest and grabbed a head and arm cross face grip on BS to secure the position. Playing loose in a dominant side control position, allowed BS to escape and get to his feet. Also, TT seemed to try to hold on to a grip that wasn’t there as BS was escaping side control and standing up. Instead of holding on to this grip, TT should have gotten his hips out and squared up to face BS rather than stay in a position to get slammed.

Conclusion:  This fight highlights just how important basic Jiu Jitsu and grappling fundamentals can be in a street fight or self-defense situation. Knowing how to stay calm, escape mount, defend chokes, break down posture, hit sweeps, and retain or recover positions doesn’t sound very glamorous or sexy. However, these basic skills that you can learn in your first 2 years of training can mean the difference between walking away from a self-defense situation with a few bumps and bruises or going to the hospital with serious injuries.

I welcome any feedback and comments. Please do not post racially insensitive comments. They are not welcomed on this site.