Richard Bresler, first BJJ student in the US, publishes memoir of his 40+ years' involvement with the Gracies and GJJ 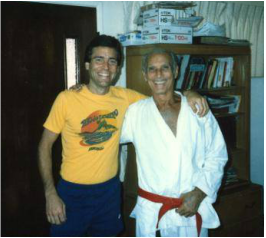 [LOS ANGELES, CA] Richard Bresler was Rorion Gracie's first student in LA, and is widely recognized as the first student of Gracie Jiu-Jitsu in the USA. His new memoir, Worth Defending, chronicles his over 40 years' involvement with Gracie Jiu-Jitsu, including the almost twenty years he spent working closely alongside Rorion Gracie to grow Jiu-Jitsu through the Gracie Garages, the Gracie Academy, and the early days of the Ultimate Fighting Championship.

Worth Defending includes never-before-published photos from behind the scenes at the first UFC, as well as stories from the early "challenge match" days at the first "Gracie Garage"—in the house that Richard and Rorion shared—and the Gracie Academy. Read the story of the birth of modern MMA from someone who was there every step of the way!

- Richard's journey out of addiction and depression through the transformative power of the martial arts.
- Richard's experiences training privately with many members of the Gracie family, including Rorion, Rickson, Royce, and Grandmaster Hélio himself.
- Richard's trip to Rio de Janeiro, where he shared the mats with the legendary Rolls Gracie.
- Richard's experience watching from ringside as his friend and teacher, Royce Gracie, won the first Ultimate Fighting Championship.
- The creation of "Krav Ground," the ground-fighting system that Richard helped develop for Krav Maga.
- Richard's experiences with and take on alternative health and dietary practices, including the Gracie diet.
- Richard's take on the current state of BJJ, and where it needs to go moving forward.

Worth Defending is available in paperback and eBook. Visit http://www.RichardBresler.com or Amazon (https://www.amazon.com/dp/B08NDZ2SFC/re ... SFbV37GSG8) to order!


Praise for Richard Bresler and Worth Defending…

“No one did more to help my dad—and my family's art—establish a foothold in the US than Richard Bresler. From the garages to the original Academy to the UFC, Richard was there doing whatever he could to make it happen. Anyone training Jiu-Jitsu in America today owes Richard Bresler their thanks.”
—Rener Gracie

"Richard’s book is an intimate telling of one man’s journey in martial arts; a great insight into the origins of BJJ in America. His extensive time spent with the Gracie family and his dedication to the craft makes Richard an authoritative voice on Brazilian Jiu-Jitsu. If you are interested in learning how it all began, definitely pick up this book."
—Lowell Anderson, Brazilian Jiu-Jitsu Black Belt

“Richard was a major influence on me in my early days of learning Gracie Jiu-Jitsu. Thanks to Richard's help, I was able to pass the Gracie Academy's strict requirements to earn my Instructor Training Certificate. Richard’s generosity in helping me train for this will never be forgotten. He is a true BJJ inspiration.”
—Steve Maxwell, Black Belt Professor, 6th Degree, Relson Gracie’s first black belt and one of the first Americans to earn a black belt from the Gracie Family

"Richard Bresler was Rorion [Gracie]'s first student in the USA. He was a great supporter of the inauguration of the Gracie Jiu-Jitsu Academy in California. Thank you, Richard!"
—Master Pedro Sauer, 8th Degree Coral Belt

"I'm very proud of Richard Bresler for his support of Jiu-Jitsu, being one of the first Americans to actually learn the art! I awarded him his black belt and he's surely a professional capable of teaching you every aspect of the art!"
—Master Fábio Santos, 7th Degree Coral Belt

"I started training in November of 1984 in a garage in Hermosa Beach. It’s considered the original Gracie Garage, but there was a garage before that and that’s where Richard started training about five years before me. I remember training with Richard in the beginning of my training. He caught me in a triangle choke and I didn’t even realize I was in a submission! Richard has been a good friend and health mentor to me."
—Chris Saunders, 5th Degree Black Belt

"If you ever googled, “Who was the first student of Gracie Jiu-Jitsu in the US?” well, you found him. I met Richard in the early '90s, on my very first trip to the original Gracie Academy in Torrance, California. He immediately made me feel comfortable and welcome. In my first class with Richard, he exhibited mastery of the original Helio Gracie teaching method. Many of his lessons prepared me to test and graduate to black belt under Grandmaster Relson/Hélio Gracie.
Get ready to enjoy the best stories about the history and legend of the Gracie Family!"
—Phil Migliarese, 6th Degree Gracie Black Belt

Jump to
Powered by phpBB™ • Design by PlanetStyles