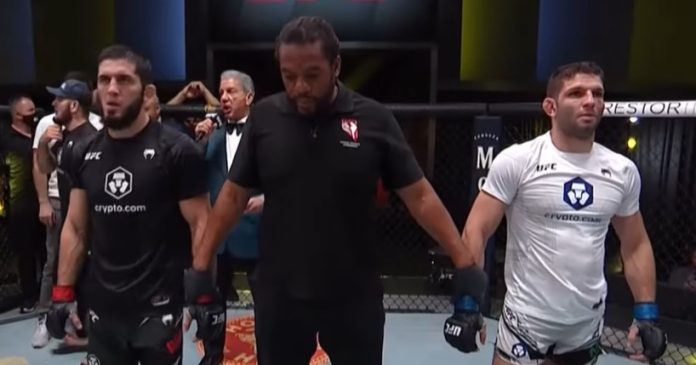 UFC fighter Thiago Moisés, 27, has been around the fight game long enough to face down some opponents that would make lesser athletes tremble. Notably, in 2021, Moisés took on current lightweight king and heir apparent to Khabib Nurmagomedov, Islam Makhachev. While Moisés would ultimately lose by rear-naked choke in the middle of the fourth round, prior to the submission, he’d lasted longer than three rounds with the Dagestani – currently the longest any fighter in the UFC has survived sharing a cage with Makhachev.

“Fighting Islam was a really great experience for me,” Moisés tells the Jiu-Jitsu Times. “I grew a lot after that fight. I’m a very different fighter now […] I think other than Arman [Tsarukyan], I gave [Islam] the toughest fight in the UFC.”

On Saturday, June 21, he looks to take those lessons into the Octagon once more in a showdown against UFC newcomer Melquizael Costa, who’s stepped up from a highly competitive regional MMA scene back home in Brazil.

Originally slated to face Guram Kutateladze, Moisés was disappointed when Kutateladze had to pull out for health reasons, but looks forward to testing himself against Costa. According to Moisés, the UFC had tried to find a late replacement from within their existing roster, but couldn’t find a fighter willing to step up on three weeks’ notice – which opened up an opportunity for young, hungry Costa.

“He’s beaten a lot of really good guys on the regional scene in Brazil.” Moisés tells me. “I’m not taking this guy lightly. I’m taking him very seriously, the same way I would take Guram. I know this guy’s a really good fighter. He comes from a good school in Brazil, Chute Boxe.” It’s the same academy that produced Moisés’ countryman and former champion, Charles Oliveira.

“I’ve never been so ready,” says Moisés. “I’ve improved so much since my last fight, and it’s going to be a long night for him.”

How’s he handling the challenge of preparing for a different fighter, after spending most of his camp focused on Guram’s style? Not too badly, as it turns out. Moisés, largely unfazed by the opponent switch-up, explains, “The only thing that really changed is that this guy is a southpaw. So I had to adapt a couple things to accommodate that, and make some adjustments, but all the training that I did to prepare for Guram was really good.”

“Nothing really changes,” he reiterates, and grins, pointing out, “This guy has two arms, two legs, and a head, just like anyone else.”

What’s next for Moisés if he beats Costa? It’s an interesting question. As a contender in the UFC’s notoriously talent-stacked men’s lightweight division, Moisés has no shortage of potential foes to face in the cage. And like any other ambitious young up-and-comer in the fight game, he’s willing to take on whoever the matchmakers send his way.

However, he’d love, above all else, to eventually run it back with Islam Makhachev.

“I’m 27 years old right now, training with American Top Team, and getting better every day – I think it’s just a matter of time until we meet again,” says Moisés.

How would his strategy differ in a rematch, having felt the Dagestani’s power once before? “I would go for more takedowns,” Moisés tells me. “I would grapple more. That’s one thing I would change. I’ve been grappling since I was a kid, and I’ve been training in wrestling at American Top Team for eleven years now, so I think I can grapple with him. I wouldn’t just do striking and takedown defense [like last time] – I’d go for [my own] takedowns and grappling too.”

It’s a bold statement, especially in regard to the man who’s probably the most feared takedown artist and submission grappler in the division – and from almost any other fighter, might sound overconfident. Moisés, however, has experienced the full force of Makhachev’s wrestling before – and survived far longer than most who live to tell the tale – which could make for an interesting rematch.

First, though, he’s got to take care of business with Costa. “I’m very excited to fight,” says Moisés. “I’m ready. I’ve never been better physically, emotionally, and technically. I really appreciate all my fans, my training partners, and my coaches.” He smiles. “I can’t wait.”