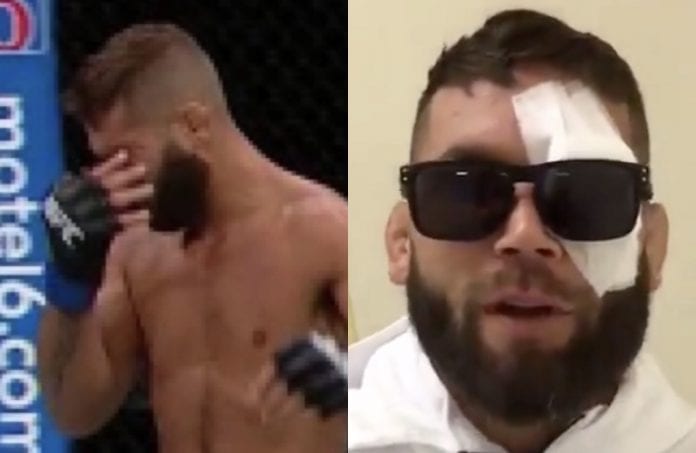 Are you even someone in combat sports this weekend if your eyes aren’t all messed up?

Last night, Mexico City showed how much it loves to fight and how much it hates ocular trauma when the main event of UFC Fight Night 159 was stopped 15 seconds into the match following Yair Rodriguez’s apparent accidental eye poke of opponent Jeremy Stephens. Fans responded by pelting the octagon with booze, bottles, and popcorn, to the point UFC staff was ducking and covering. Stephens, according the ESPN, was taken to the emergency room after the match:

Last night Rodriguez seemed conflicted about the altercation, stating that he gave “Lil’ Heathen” the benefit of the doubt but specifying that Stephens would have to “live with it the rest of his life” if he was lying about the severity of the damage:

Today, rocking the requisite sunglasses and some bandages, Stephens released the following clarification for those questioning whether he was hurt badly enough to have to stop the fight, saying:

“I heard you think I’m faking? Bro, you’re the one who poked me in the eye,” Stephens says, before stating he’s open to trying the fight again in either two or five weeks, whatever.

There’s still been no elaboration beyond “deep bruise” as to what exactly happened when Heathen’s eyeball connected with Yair’s finger, but it does seem fairly unlikely Stephens is faking. At least in this case the damage done involved 15 seconds of fighting vs. the air/sweat droplets that seem to have landed poor Keenan Cornelius in the ophthalmologist’s office.