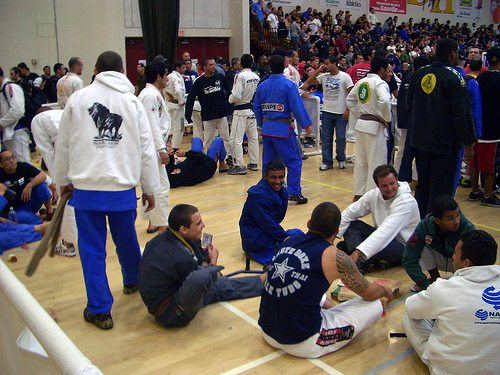 As we train day in and day out we will inevitably lose weight. When competitions come up, some of us wind up sitting in the middle of a weight class, below the top but above the top of the next bracket. A common conversation I hear is the thought process of whether or not to cut weight.

For starters, in my personal experience I have never lost a match because the other person was simply too big or too strong. I always lose due to inadequacies in my own techniques, or superiority of the other person’s methods in that given match. Simply put: being bigger than me doesn’t mean you’re going to beat me.

On the other hand, being bigger than my opponents is always nice, and if I can squeak by and get into the bracket below my normal walking around weight, all the better. Size matters. It’s not the end all be all, but a match between two people of the same skill level with a 100 pound difference often sees the heavier man win.

Then there’s the factor of teammates. Some people don’t like competing against their teammates, and those people are well advised to find themselves competitions where none of their teammates are competing, because otherwise there’s a chance of facing each other.

Cutting is miserable. It is a physically and psychologically grueling effort. I’ve personally done poorly at many tournaments for which I’ve cut, and done fairly well at tournaments which I went into at my normal walking around weight. Comfort leading up to a tournament is important to me because it allows me to focus on the task at hand: sharpening my techniques to the point that other people will not be able to stop me.

I know people who view cutting as part of that process. They feel that the very best way to prepare is to ready the body and the mind, and part of the body being ready is the body being physically light. Let’s face it; the majority of mass that we carry around with us on a daily basis isn’t functional.

Another key element to look at when deciding whether or not to cut is the importance of the tournament. If I’m driving 5 hours to Chicago to compete at an IBJJF open, I’ll be far more likely to cut than if I’m going to an in house smoker at a local school. Far too often I’ve seen brackets combined because there was only one person in a lighter or heavier bracket and the result is that the cut was in vain to begin with.

What are your experiences with cutting? Do you do it? And if so do you always do it or just for bigger tournaments?

Emil Fischer is an active blue belt competitor under Pablo Angel Castro III training with Strong Style Brasa and is sponsored by Pony Club Grappling Gear and Cruz Combat. For more information, other articles, and competition videos check out his athlete pages at www.facebook.com/emilfischerbjj www.twitter.com/Emil_Fischer and https://instagram.com/emilfischerbjj