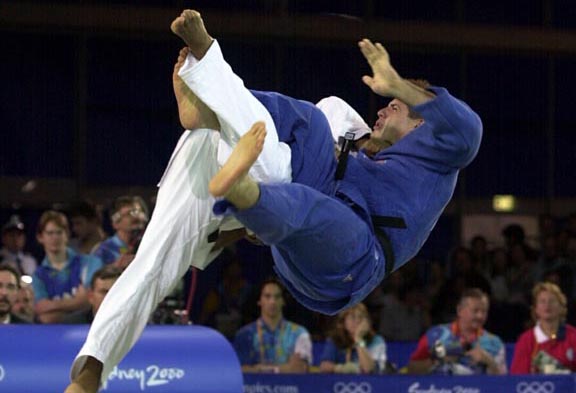 I’ll be the first to admit I don’t really like the takedown game. I am not terribly coordinated and my awkward movements make it as likely that I’ll hurt myself when trying to take someone else down as I am to put them to the ground. One time, I went for a takedown and actually gave myself a bloody nose by bashing my face against the other guy’s knee. I’d much rather lazily flop on the ground and let the match start right then and there.

All of that being said, there are many merits to takedowns for BJJ. By takedowns, I’m referring to moves that were popularized by wrestling and Judo. A person with a strong base in either of those two arts can make a decision to dictate how exactly their matches hit the ground, either by taking the other person down or controlling them and deciding when and in what fashion the match becomes a ground battle.

In a standard IBJJF tournament, that initial control is rewarded with at least 2 points (more if you can pass the person’s guard off the takedown and then mount them). In a real fight, that takedown can be the end of the fight, and it can enhance your ability to address multiple assailants. So, yeah, takedowns can be great.

On the other side of things, the activities required to get good at takedowns put a lot of wear and tear on the body. A person who hasn’t been wrestling or doing Judo since childhood is very likely to suffer from injuries if they try to get good at takedowns. Getting good at anything in martial arts requires repetition, and takedowns are inherently a high impact activity. This is a cruel fact of life, and those of us who start later in life may want to consider a different approach.

Also, as I mentioned above, takedowns are worth 2 points. If after scoring those 2 points, the other person puts you in their closed guard and submits you, those two points were worth nothing. It’s a whole lot of work to do only to wind up with the other person getting their hand raised.

If Jiu Jitsu competition circuits want to reward good Jiu Jitsu (Namely the absence of guard pulling), they should consider going a different route. There has been a lot of talk recently about some new organizations coming up (specifically one founded by Rigan Machado and one by Rickson Gracie) that reward the takedown more generously, and punish the guard pull. These sorts of constructs can help encourage people to stop butt scooting and seesawing (*cough* 50/50 *cough*) and start being more aggressive.

I on the other hand will continue flopping about like a fish. Like many I am far too lazy and uninterested in “self defense” to really care about the takedown. I’m not saying I’m right or wrong, just that in the current status quo set up by the IBJJF and other fine competition circuits, the takedown just isn’t worth the hassle, and it should be! Now stop lifting weights and go lift people.