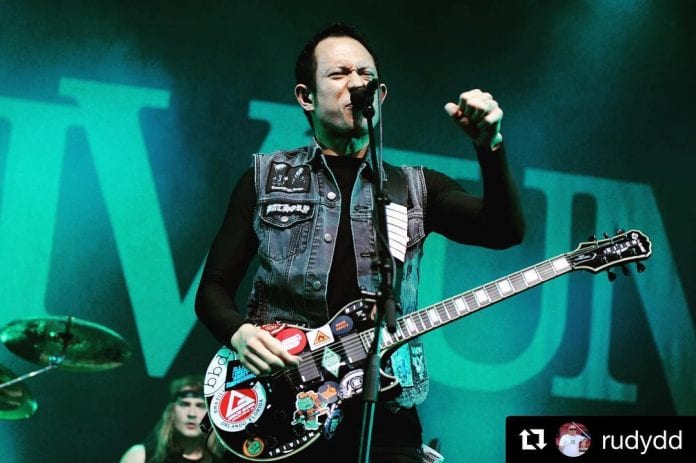 When jiu-jitsu practitioners find out that an actor or musician they already like does jiu-jitsu, it just increases their respect for that individual.

I’ve been listening to heavy metal for a long time, and a band that has been on my playlist for many years is Trivium.  When I learned that their singer/guitarist Matthew Kiichi Heafy trains, I reached out to him to see if he’d be willing to share some of his experiences being a musician of his caliber and actively trying to get good at the gentle art.

“My first official class at Gracie Barra North Orlando was 3-13-13.  I remember this number very well since I’ve always considered 333 my lucky number.”

“My dad would always bring me to his UFC parties with his pals when I was young; back in the beginnings of UFC. So seeing the mixing of martial arts was something I was introduced to early on. Being Japanese – naturally – I was enrolled into karate at a young age, but I never really excelled or stuck with it past elementary school.”

“While recording our sixth Trivium album, Vengeance Falls, we lived at producer David Draiman’s house. We would watch UFC all together anytime it was on. It took me back to my childhood, being able to watch UFC in an environment with friends once again. David would explain to me what the positions and submissions were when I’d inquire.”

“The last piece of the journey into BJJ was from the first time Trivium toured Brazil. I fell in love with the country, and for me – I said that I wanted to do what the Brazilians do. That looked to be either soccer or jiu-jitsu.  As I always do with all my choices in life, I picked what I assumed to be the more difficult path.”

“Piecing all of this together is what led me into BJJ.”

“I train under Gustavo ‘Gutty’ Muggiati at Gracie Barra North Orlando. I was recently awarded my purple belt.” 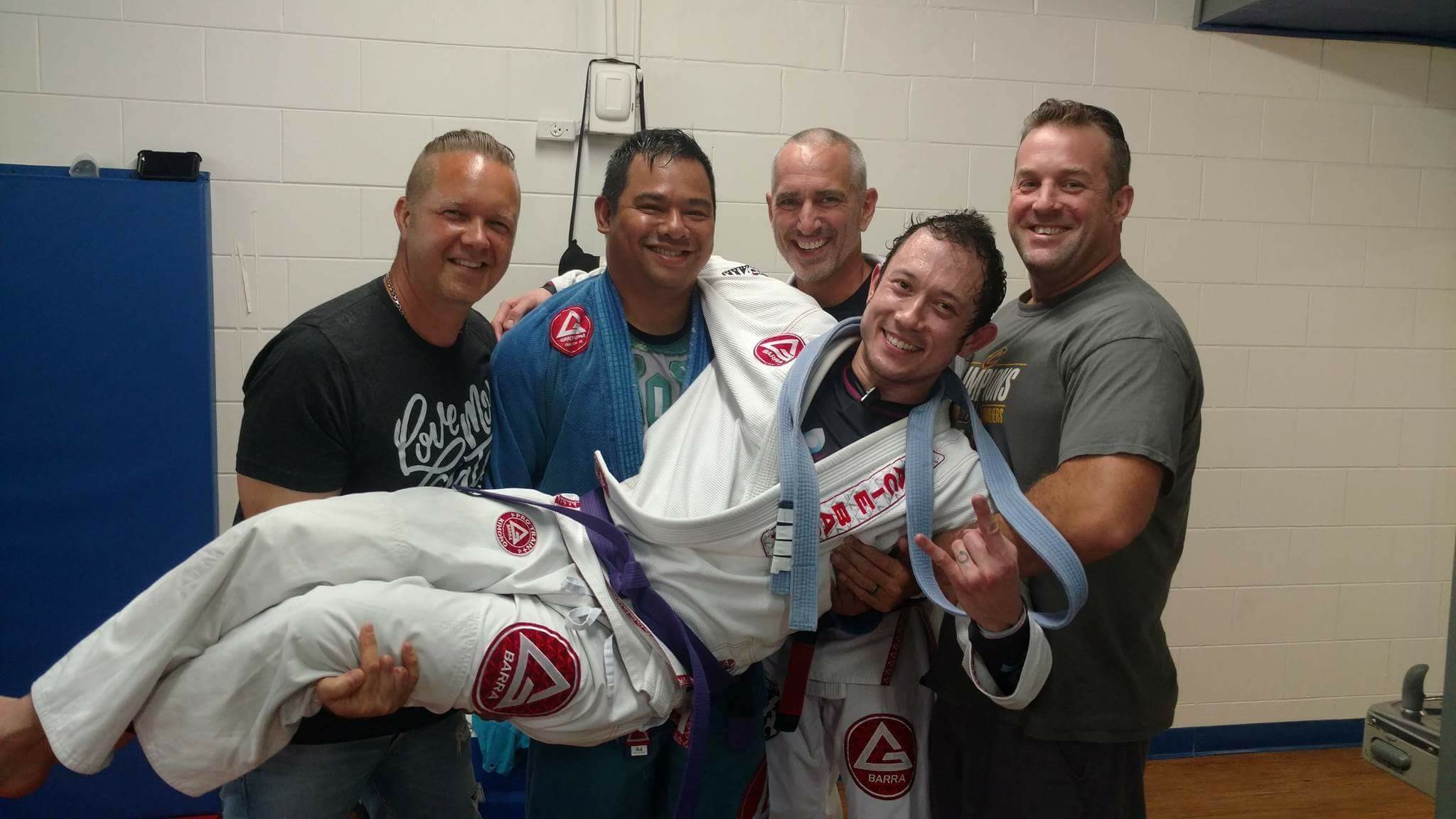 As jiu jitsu’s popularity grows, so does the number of celebrities who train.  These people range from casual fans that put on the gi on occasion and train, to avid competitors.  The degree of a person’s celebrity is not a good predictor of whether or not he will pursue competition.  I was interested in Matt’s thoughts on competition, particularly given his unique position in a band like Trivium, which is constantly touring or putting out new content.

“Whether I’m home for one day, one month, or one year in between tours, I am at Gracie Barra North Orlando. When off, I am there six days a week, training with my teammates in class with everyone.”

“On tour, I’ve been teaching my tour manager for the last three years or so. I have numerous coaches, professors, and training partners who will visit our 10×10 mobile BJJ gym we bring with us everywhere. There are a few gyms I will train at on tour as well.”

“Any fellow musician is a favorite musician to train with. Billy from Biohazard is an incredible coach. I love training with Herman from Dragonforce. Ty from Everybody Panic is one of the most knowledgeable professors I’ve had the privilege of training with on tour.”

“I have competed. My first competition did not technically go well for me in terms of ‘win or lose,’ but as we say in terms of “win or learn,” the knowledge gained was priceless. Competing showed me that what I thought was BJJ, wasn’t. After that 12-0 plus RNC loss, I began training more efficiently, using everything in my life to help benefit my jiu-jitsu.” 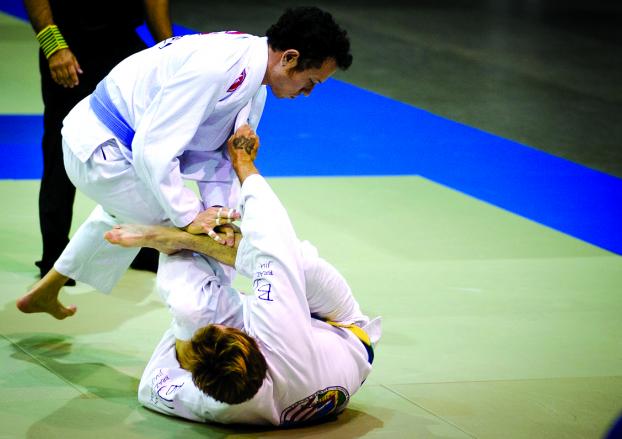 Whether or not you’ve heard of Matt Heafy and Trivium, both the band and its lead singer have acquired substantial attention, producing albums that have hit the charts at just about every turn and playing around the world.  There are some challenges that a person in Matt’s position faces that those of us in other professions will never have to face.  I was curious to learn about some of the challenges and difficulties that he faces on a day-to-day basis insofar as training. 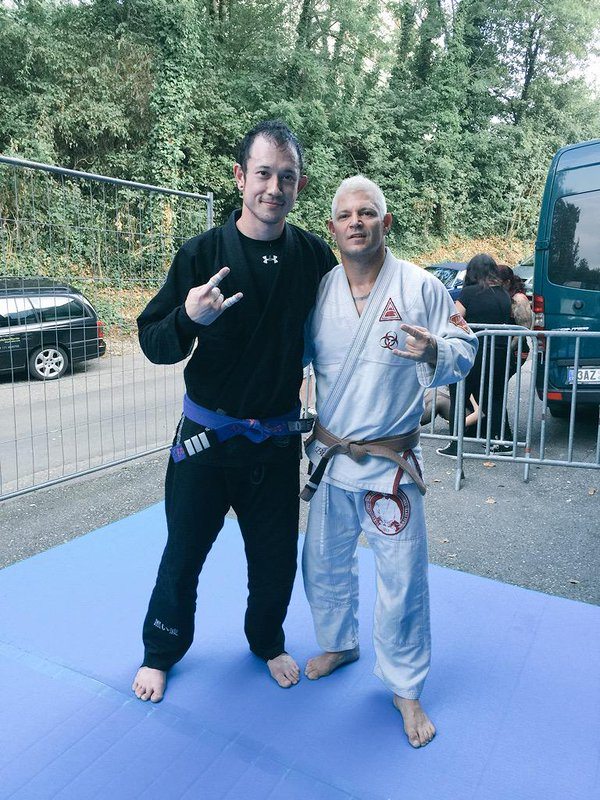 “I have had some unfortunate finger accidents (hyperextensions, dislocations, etc), but that’s the risk when doing any activity. So it’s about prevention and awareness, but also about keeping the training going.”

“I prefer gi, but I will do no-gi as well.  I tape my fingers, and spider guard is one of my favorite open guards. I do have those beautiful spider-callous-bubble-knuckles now, but heck! It makes my guitar-fretting stronger.”

“I’m not recognized often when training at other schools. Then again, I mostly train with friends from other gyms at the venues on our mats. This is the more common situation due to the tasks at hand requiring me there on a typical show day.”

“I do need my training partners – while touring – to know that I play guitar and sing professionally. There are certain submissions that aren’t great on a show day when I’m singing for 90 minutes. Wrist locks are something we ban on tour. Ezekiel’s and any brutal windpipe chokes (guillotines) are something I always ask my partners to skip. Gi chokes, lapel chokes, RNC’s – all totally fine. It’s really Ezekiel’s and wrist locks I need people to avoid while touring.”

“It really just boils down to risk of injury. No, I am not injured often; no, I do not live paranoid of injury. But, it is very important for me to be cognizant. I need to know if my partners are historically magnets of injury (to themselves or their partners), and if that’s the case, I can’t train with them on or near a tour or album. When there isn’t a tour around, I can train with anyone, but my teammates know what I do. I play guitar and sing. That allows me to do BJJ, so I need to respect both of those angles.”

“Beyond all that, I am so thankful that BJJ has brought me into a new world of amazing friends. I find that the metal, BJJ, and food world’s have some of the most impassioned and incredible people. ” 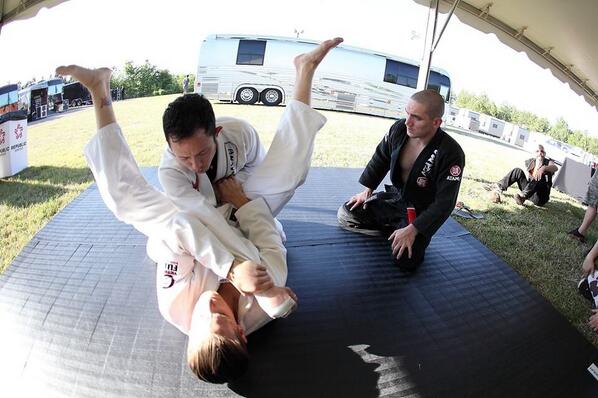 Like many reading this probably are, I was curious about what Matt Heafy’s preferred jiu-jitsu game is.

“Nowadays, my game has evolved to a more top-preferred game. I find – for me – top requires less general exertion than bottom (but that’s just for me; I know others find the opposite).”

“I have much work to do in my stand up, but I do love to have the top angle when starting stand up. I love judo trips and throws for drills, but it seems a good ol’ double leg is still a better move for me when standing. I do like when my opponent pulls guard from standing because then it’s time to smash and pass.”

Since I am a professional musician, I unfortunately will never be a world-class professional BJJ competitor, so naturally, BJJ is a self defense more than anything for me. With that said, I absolutely love the sport scoring system and the friendly-competition that exists in BJJ. I have referenced rolling with your pals to be like ‘playing Goldeneye on N64 for the first time with your best friend.’ I love grappling.”

“My professor is my guitar student, so we will swap guitar/BJJ one-on-one lesson days sometimes. Gutty has really helped me make spider and spider/lasso guard into my go-to open guard. I love the triangle possibilities from open guard.”

“Recently, I have been shown the world of leg-locks. Interestingly, I feel that I understand leg-locks far better than anything arm or choke based. Leg defense and offense feel like things I can pick up and understand quicker than the same for arms. I love a stray ankle of an opponent. Haha!” 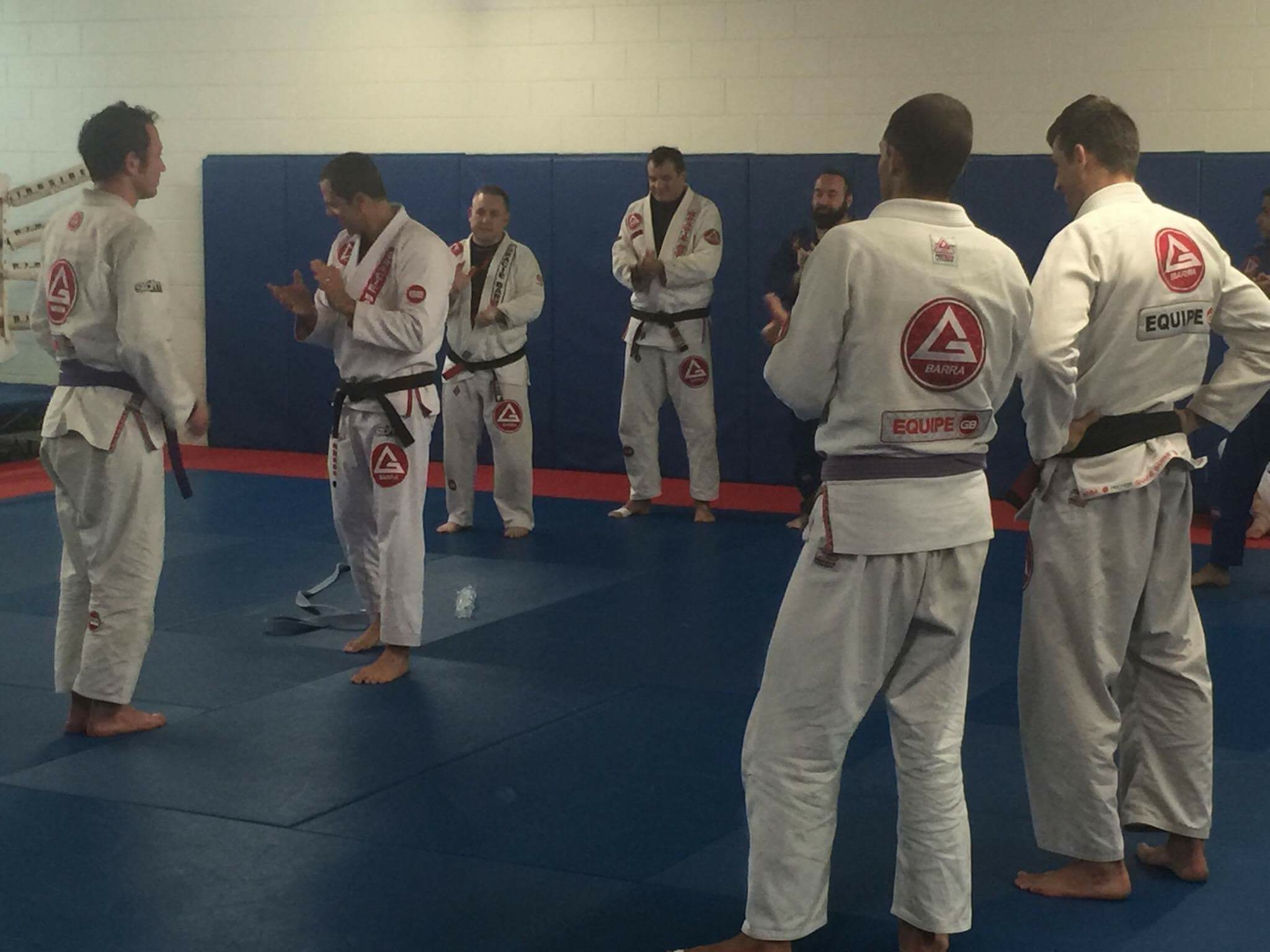 If you ever get a chance to roll with Heafy, hide your ankles!

As a hobby, jiu-jitsu presents every practitioner with different options and possible goals.  Matt Heafy’s goals are pretty much what one would expect from a jiu-jitsu lover in his situation.

“I know for a fact I want BJJ in my life forever. I can’t imagine BJJ not in my life. Even my touring days have become centralized entirely with finding mat space, time to train, and picking the lesson plan and training. Whether placebo or not, I can confidently say that I perform better on stage if I have trained and grappled that day. Festivals, clubs, headlining, supporting – I need to train on a show day.”

“Perhaps when I get my black belt, ages from now, I can offer lessons to Trivium fans on tour. Empowering our supporters to feel confident in defending themselves and learning the greatest martial art on the planet.”

For Matt, the relationships he finds in jiu-jitsu are a major part of what makes it so special to him. 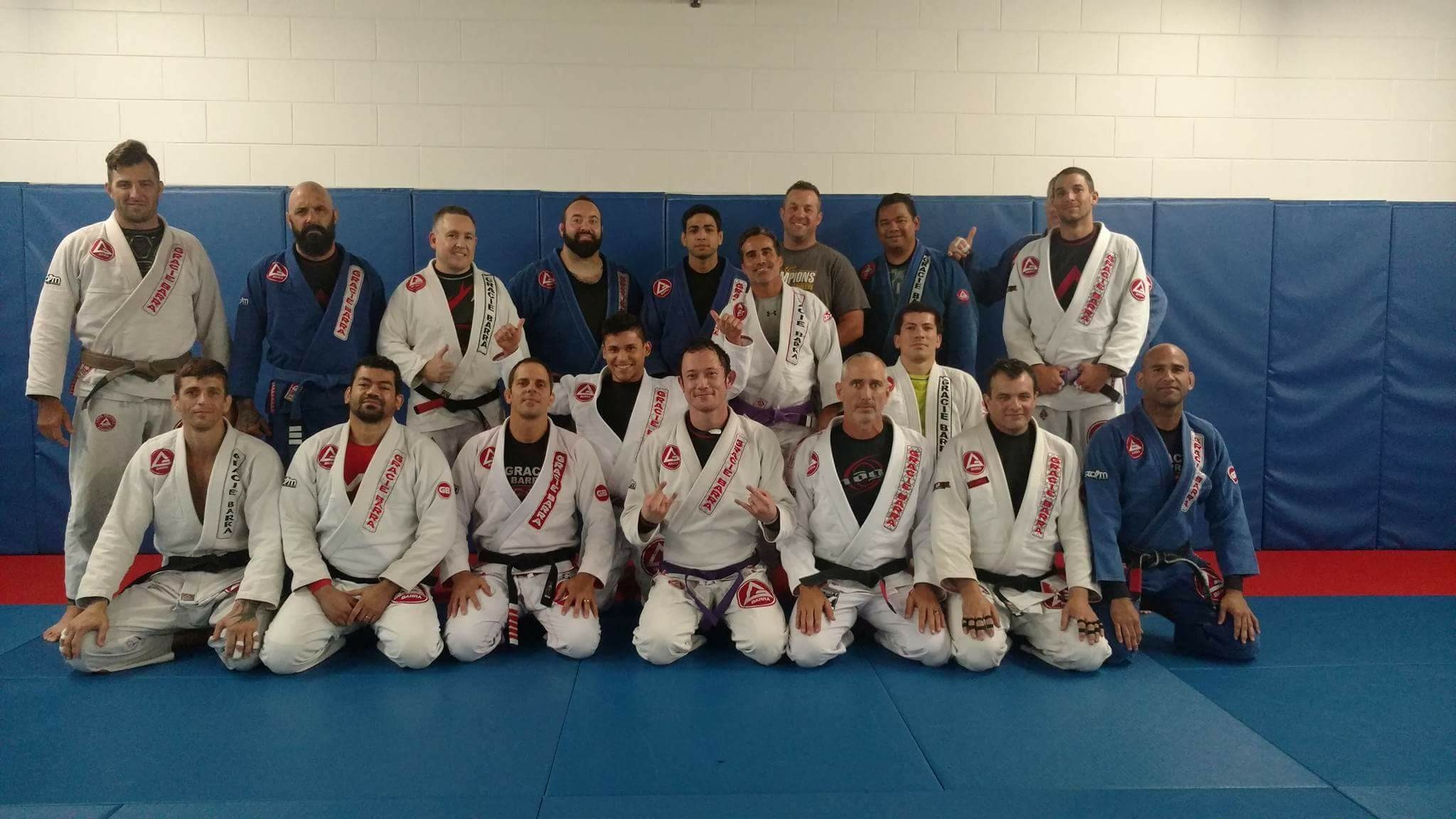 “Without a doubt in my mind, the bond I have with my team – then within that team with my closest training partners – is just like the bonds I have with my band mates. I am so fortunate that my band mates aren’t just the people I make music with, but they’re some of the closest friends on this earth, ones who know me and make me want to be the best version of myself possible.”

“The exact same resounds true for my close BJJ partners. They are the people that together – we all grow and learn about ourselves; we learn to serve a purpose beyond the self, and look to the betterment of the whole.”

“I used to say there’s no better way to get to know someone than sharing a meal with them. There is one more accurate, deeper way – to roll with them.” 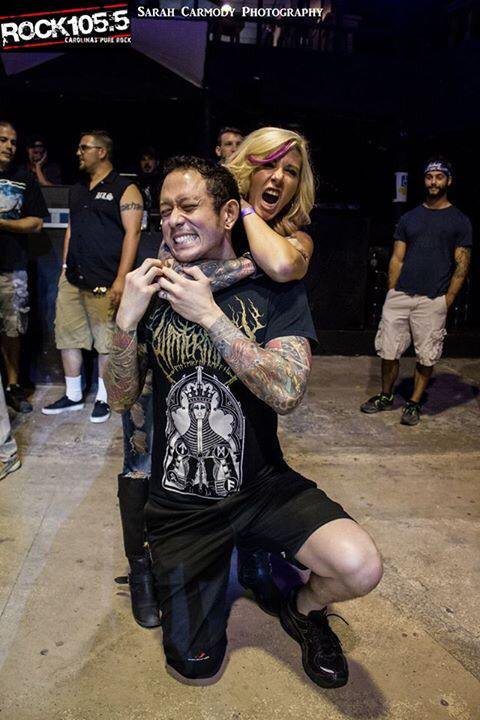 In conclusion, Matt had some special thank-you’s and shout-outs

“I want to give my endless thanks to my professor Gustavo Muggiati. You have changed my life for the better. Never have I learned this much about myself through anything before. I’ve seen everything I love in life benefit from the jiu-jitsu you teach me.”

“Thank you to Marcio Simas for making Gracie Barra Orlando what it is. Without you, our schools wouldn’t exist. You are responsible for much greatness in our community of BJJ.”

“Without my road professors and road coaches all around the globe, I wouldn’t be able to keep up what I can keep up. Thank you all for having me in your homes. Thank you to Joey B for being my student for the last three plus years of touring. I would not have been able to keep up BJJ without your dedication as my student while you still tour manage and run our sound.”

“And finally, thank you to Brazilian jiu-jitsu for being exactly what my mind and body have always needed. Anyone who has ever been curious about the sport, try it! It is physical exercise, conditioning, self defense, a fun and competitive sport, and one of the best forms of mental therapy I have ever experienced.”

Big thanks to Matt Heafy for taking the time to share a bit about his jiu-jitsu experience with the rest of the jiu jitsu community!