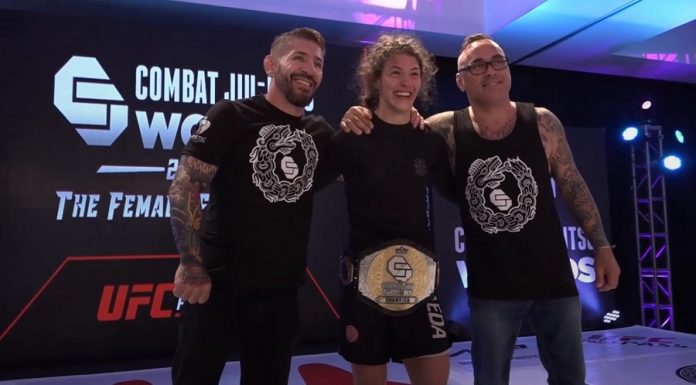 The first Combat Jiu-Jitsu flyweight championship tournament saw a number of action-packed matches from stars from the jiu-jitsu scene and the MMA world alike. When the dust had settled, the world had a new rising star to pay attention to in new flyweight champion Brianna Ste-Marie.

The main event superfight saw CJJ veteran Kyle Boehm take on CJJ middleweight champ Dan Martinez in a light heavyweight match, starting things off with some hand-fighting on the feet. After the coin flip, Boehm chose butterfly guard and worked his way into rubber guard. Martinez was able to slip out, however, and worked to pass Boehm’s notoriously challenging guard. Martinez focused heavily on knee cut passes, at one point nearly getting his leg trapped by Boehm, but managed to escape from danger to continue trying to get past the legs.

With just over two minutes left, Boehm got back to his feet, pulling closed guard again soon afterward and transitioning to rubber guard. Martinez managed to get out again, focusing on passing Boehm’s guard and getting in a few strikes until the last few seconds, when he tried for a leg lock that didn’t seem to faze Boehm.

Martinez started on Boehm’s back in overtime, but it was just six seconds until Boehm could roll out and switch the position.

When it was Boehm’s turn, he locked up a body triangle, making Martinez’s escape even more challenging. As it turned out, though, Boehm didn’t even need to rely on ride time to win the match. He locked up a rear naked choke and got the tap from Martinez.

After making their way up the bracket, recently promoted brown belt Brianna Ste-Marie and black belt Liz Tracy faced off in the finals to see who would take home the first CJJ flyweight championship title.

The first minute saw Tracy shooting for takedowns, but she wasn’t able to get any before the coin flip. Tracy chose the top position in butterfly guard, and Ste-Marie closed up her guard, jumping into closed guard again when Tracy stood up. Tracy countered with some heavy strikes and again stood up, with Ste-Marie maintaining her guard. Ste-Marie landed a few strikes as she kept her guard locked around the standing Tracy, and Tracy again came back with some heavy palm hits.

As they returned to the mats, Ste-Marie cut an angle while Tracy stacked her to try to stay out of danger. However, Ste-Marie was able to extend one of Tracy’s arms, and though Tracy tried to step over her opponent to get out of it, Ste-Marie was relentless and got the tap.

After Ste-Marie was crowned the CJJ Flyweight Champion, she revealed that she only started practicing striking about a month ago, choosing to focus her game plan on good grappling and strike defense.