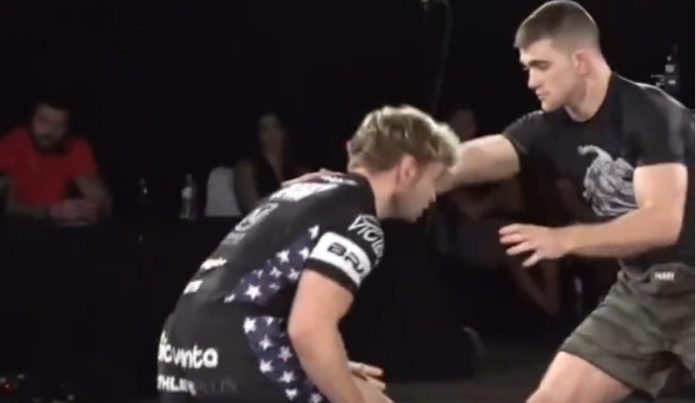 Nicky Ryan and Dante Leon put on an impressive show at the Road to ADCC, with Ryan displaying some great wrestling against the Canadian. But though he took home the win, it appears as though Ryan will be going home with a knee injury he sustained during the match.

Ryan gave us a glimpse into his desire to wrestle with a double-leg attempt against Leon, who latched onto a front head lock. After they separated, Ryan got a front head lock of his own, trying to drive Leon down to the mat before the latter escaped his control. At about three minutes in, Ryan got the takedown he wanted, landing in Leon’s guard from a double-leg. Ryan broke open his opponent’s guard and searched for a leg attack, ultimately having to concede the bottom position while Leon worked to pass. Ryan created space from the guard and chased Leon up to his feet, driving him back down with another double-leg. Ryan sat back for a heel hook attempt that Leon managed to pull himself out of.

Five minutes in, and Leon was back on top trying to pass. Leon stayed low, applying pressure in his passing attempts, and Ryan drove forward with another double-leg to reverse the position, pulling his head out of a guillotine attempt from Leon in the process. Leon was able to reverse the position with no resistance from Ryan, with Ryan being penalized for pulling guard. The ten-minute mark passed with Leon trying to pass Ryan’s guard and gain the first points of the match.

Ryan elevated Leon and drove forward with the double-leg again, toppling his opponent over, but Leon scrambled up to his feet to keep Ryan from earning points. Leon shot for a takedown, but Ryan stepped away. Ryan brought Leon to the ground with another double-leg, but wasn’t able to keep him there, and Leon hurried back to his feet. Ryan’s next takedown was successful, and he put the first two points up on the board. He quickly passed to side control to add another three points to his score. Leon recovered his guard, and Ryan tried to counter with a back take, abandoning the attempt eventually and allowing the match to return to the feet.

Ryan, however, was limping on his way back to the center of the mat and sacrificed a penalty point by pulling guard. Time ticked away with just five minutes to go as Leon struggled to pass Ryan’s guard again, with Ryan trying to attack from the bottom while keeping Leon at bay. Leon was unable to pass, and Ryan limped into the center of the mat to get his hand raised.

Nicky Ryan was declared the winner by points.

In the post-match interview, Ryan said that he believes he injured his knee when Leon sprawled on him as Ryan was trying to take him down. 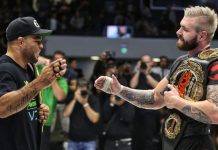 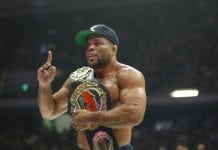