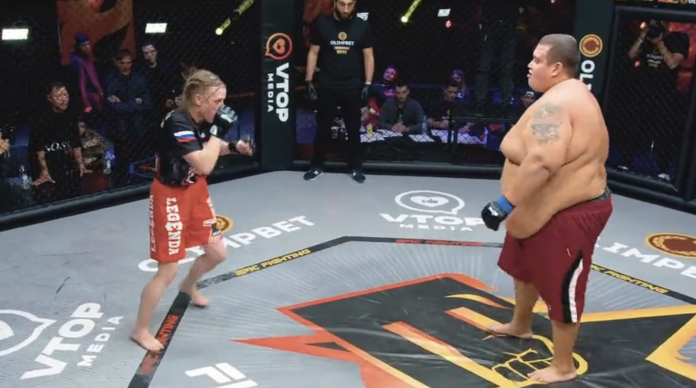 Russia’s Epic Fighting Championship is making headlines yet again as they host another bizarre intergender MMA match, this time a 2 vs. 1; a 75-year old grandfather and grandson vs. a woman.

The woman in question is Yulia Mishko, who showed that she was more than capable against the pair of strange men. She had great awareness of her two opponents’ positions and used some surprisingly-decent movement to create angles and avoid being cornered. The most significant shots of the fight came from Mishko as she clearly dominated the fight, but the fight was decided as a draw- for some reason.

It should be noted that these events are not only absolutely cringy but completely unethical. The only saving grace here is that the woman whoops the grandson/grandfather combo, as I’m sure the promoters were expecting. Russia is a wild place.

it's here and it's beautiful. first we have Yulia Mishko vs Vladimir Spartak and his grandson BIG IGIBOB. fight goes to distance. #popMMA pic.twitter.com/A7fro1gQEU

The event also featured a Women’s strawweight fighter against a 529-pound man, and a female adult-film star fighting a male. Absolute circus.

The entire event can be watched on YouTube below: