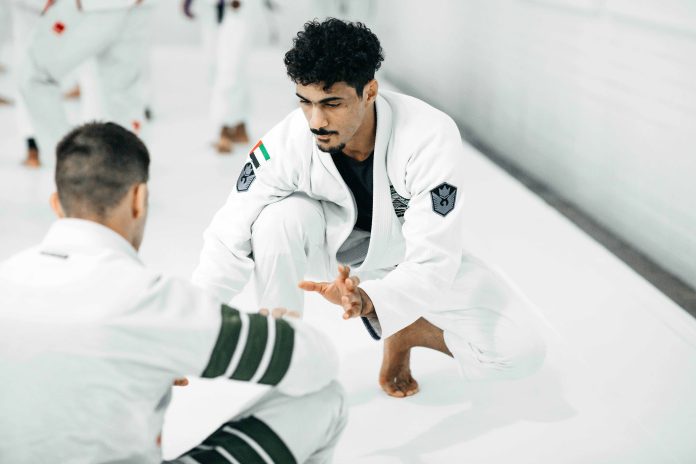 Abu Dhabi, July 12, 2022: The UAE national jiu-jitsu team has arrived in Birmingham, Alabama, for the prestigious World Games 2022, the international multi-sports event held every four years. The team will start a light training regime tomorrow in preparation for competition on Friday, July 15.

Considered a global showpiece for sports yet to be included in the Olympic Games, the 11th edition of the World Games will run from July 7-17 in the USA. It will feature approximately 3,600 participants from 100 nations competing across mor than 30 sports.

A jiu-jitsu squad of five athletes from the UAE qualified for the games and are hoping of building on a landmark performance at the 2017 Games in Warsaw, Poland. Last time out, the UAE’s Faisal Al Ketbi captured the gold medal in the under-94kg category and there is a strong desire among the delegation to repeat the feat this month. Al Ketbi, this year competing in the 85kg category, will be joined by compatriots Muhammad Al Amri (77kg), Muhammad Al Suwaidi (69kg), Shamma Al Kalbani (63kg) and Balqees Abdelkareem (-48 kg).

The weigh-in of some 96 jiu-jitsu players will take place this Thursday, July 14, with the tournament following the next day. The competition for the open weight division will be held on Saturday, July 16.

Ramon Lemos, head coach of the UAE team said “Our early arrival here and the establishment of our overseas training camp is all part of the UAE Jiu-Jitsu Federation’s plan for maintaining the players’ readiness and concentration in the lead-up to the competition.

“The Federation and the technical staff have complete faith in the national team’s players. Each has the skills necessary to outperform the finest players from across the world. Helping our athletes maintain optimum energy and a balanced state of mind so they can perform at their best is arguably our top priority. It’s certainly the biggest goal of our technical staff.”

Lemos explained the method of the participants qualification for the competition is subject to strict criteria based primarily on performances at the most prestigious international and continental tournaments over the past three years – 2019 through 2021.

“The participation in the World Games is limited to a group of the best and strongest players in the world ranked across every weight division,” he added. “They are each here because they earned the necessary qualifying points in various tournaments, so the competition represents a significant test not just for our athletes, but for the top athletes of every national team in the world.”

Lemos continued by saying that the participation of 5 members of our national team in the World Games is indicative of the level of advancement that jiu-jitsu has seen in the UAE. “Entry into the competition is based on a specific process and a qualifying round that considers the players accomplishments, ranking, and predetermined weight categories. Only 96 players from all over the world have qualified to compete in jiu-jitsu at the World Games, which demonstrates the tournament’s quality.”

Balqees Abdelkareem qualified for the games after winning gold medals during the World Championship in Abu Dhabi in 2019 and 2021.

“The team is exposed to a careful and intensive training and nutritional programme to boost the players’ preparations, raise their abilities and help them identify their strengths” said Lemos. “All that combined, we hope, will lead to them producing their greatest performances yet on the mat.”