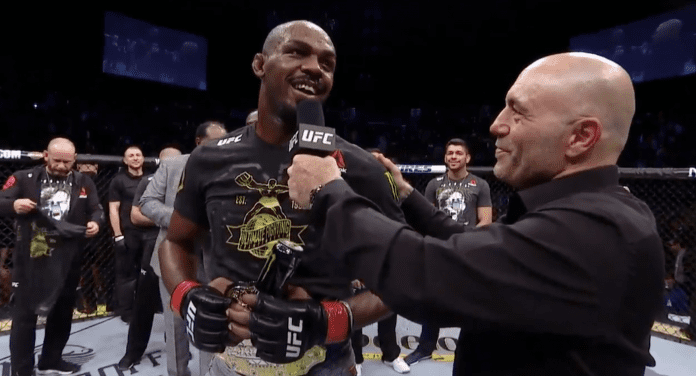 Jon “Bones” Jones once again reigns atop the UFC’s Light Heavyweight mountain. The former champion regained his crown after defeating challenger Alexander Gustafsson in the main event of UFC 232.

Jones stayed on his knees as Gus moved to the center of the cage. Bones got up and the two went into a clinch, but Gus broke away. The match had to be stopped briefly for a low strike to the groin by Jones.

The two exchanged in a fairly even match. Jones landed a knee, but didn’t cause any damage. The two clinched again, but Alex broke away. Jones looked like he was going for a superman punch. He then went for a takedown, but Gus stayed up.

This time Alexander went for a superman punch and later tagged Jones with a right. Jones circled to Gus’s right. Both men read each other’s range. Jones landed a body kick shortly before the round came to a close.

Gus chased Bones around the cage in the second, primarily using his legs. Jones, however, kept Gus at kicking range, shutting down his opponent’s boxing.

Again the match had to be stopped briefly, this time from an eye poke from Alex.

Gus came out swinging when the fight resumed, landing some solid shots and continuing the cat-and-mouse game. Jones landed a leg kick that almost took Alex off his feet, and the two went into a clinch. Jones landed a knee to the midsection before they broke apart.

Bones went low and then high with a kick, tagging his opponent. Alex looked like his left leg was hurt, and the round slowly started to turn in Jones’ favor shortly before it ended.

Gus continued to put the pressure on in the third, but Jones continued to tag him. Jones charged in for a takedown and rained down some heavy elbows. Bones ground his elbow under Gus’s chin, holding his opponent down and moving into side control, then taking the back as Alex tried to roll out. Jones let loose a barrage of heavy punches from Gus’s back, and the referee had no choice but to stop the fight.

“Daddy’s home,” he told DC, who was no doubt watching the fight. Could fight between Jones and Cormier be coming up?