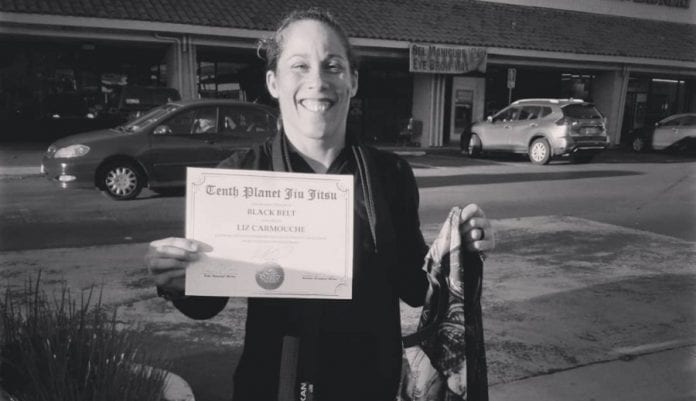 Carmouche, who trains under the 10th Planet system, is often considered a pioneer in modern women’s MMA — she was a part of the first ever female UFC fight, in which she faced Ronda Rousey. Before her UFC career, she also fought for Strikeforce and Invicta. She was also the first openly gay female UFC fighter.

Words can't explain but I'll do my best. I am so honored to train with everyone in the #10thplanet system. Today I received my black belt because of the amazing team I work with every day. The talent that I'm learning starts at the very top with @eddiebravo10p down to all the white belts. Thank you @boogeyman_tfs @freakahzoidtfs @kevinberbrich @pbarch10p for leading all of us and paving the road by example. Everyday I am humbled and thankful to be a part of @10thplanetfreaks

Carmouche’s MMA career came after five years of service as an aviation electrician in the United States Marines, during which she toured the Middle East three times.

In addition to her MMA fights, Carmouche also competes in BJJ. She was a part of the 10th Planet team at Subversiv earlier this year, and in November, she hit the Fight 2 Win stage in San Diego.