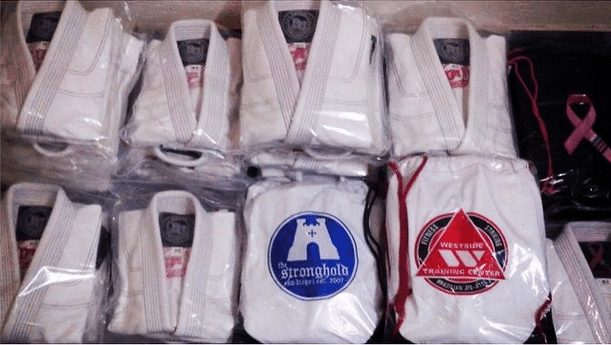 Many academies and professors have specific rules or opinions about uniform color. I’ve heard it all: white Gis only, white belts must wear white Gis, white blue and black only; navy and grey are acceptable but frowned upon, etc. The rules are as diverse as anything else in this sport, and they can be fascinating in and of themselves.

My personal opinion is that what I wear is of no one else’s concern. I own Gis of all sorts of different colors and color combinations. I have Gis with crazy sublimated rash guard linings, and austere, simple white Gis. I believe that the Gi you wear can be part of your self expression. However, my opinion is not shared by all.

There are high profile academies that have frequent pictures taken. At these academies the uniform contributes to a sort of uniformity, and often they prefer their members to all wear white Gis. I’m referring specifically to AOJ (the Mendes brothers’ school). Also, it is my understanding that a dark color Gi can sometimes stain the mat, though I’ve never seen this happen.

Helio Gracie and his children have expressed a vocal opinion that a Gi should be clean and white. That it is an expression of the person within and that a Gi of any color other than white is something that means that the person inside of it is a mere dandy. As a result, when and if you go to a seminar with one of Helio’s children, if you want them to like you make sure you wear a clean white Gi.

Given that it is often difficult to keep a white Gi white (we often sweat and bleed profusely in our Gis), some academies have more relaxed rules. I’ve seen academies that allow white and blue Gis. The idea here is borrowed from Judo Competition rules which also allow for blue and white.

The idea of Gi color holding meaning is entirely arbitrary, and debatably kind of a stupid one. Now, I’m not saying that the people who value this idea are stupid, just that the idea itself is. A darker colored Gi will show blood stains less and will age better over time. No one like a yellowed, blood and sweat stained Gi that you just can’t get clean, but a black, blue or navy Gi that has aged often has a certain badassery to it that is undeniable.

Whatever your preferences are, the Gi you wear means so much less than the person wearing it. I’ve seen terrible practitioners who only wear white Gis and some of the best out there love their unusual colors. As a friendly word of advice though always ask your academy about their Gi color policies before buying a Gi that isn’t white as you may find out that the rules are going to change or have changed.