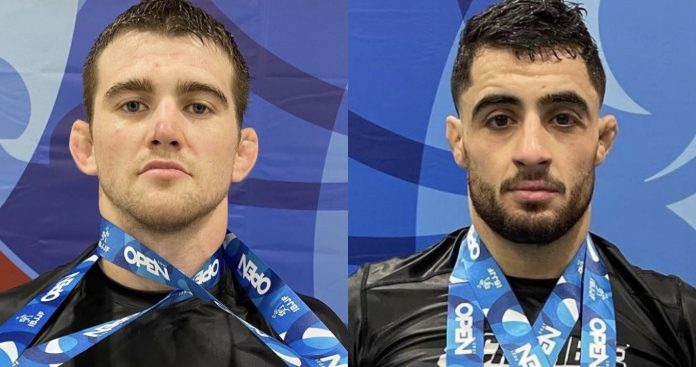 On Saturday, November 20th, Dante Leon takes on Oliver Taza at GrappleFest 10. This will be the first confrontation between the two Canadian stars.

Both Leon and Taza are shaking off losses at No-Gi World’s and 3CG Underdogs and it goes without saying that both men are yearning for redemption.

Tune in to FloGrappling to witness the action!

But until then, let’s dive deeper to predict how this match plays out.

Dante Leon’s skill set is well-rounded and lacks significant vulnerabilities. Leon can defend heel hooks, retain guard, wrestle up, and his explosiveness is faster than the eye can see.

I don’t believe he will have trouble against a leglock specialist such as Oliver Taza. During Leon’s previous fight against the prodigy Nicky Ryan, you saw Leon repeatedly thwart the onslaught of Ryan’s leg attacks— although ultimately losing by takedowns.

Dante Leon’s progression over the past few years evidences that his game and, more specifically, his heel hook defense has drastically improved.

But keep in mind, Leon may lose by points if Taza can outwrestle him. He is in for a rough match if Oliver Taza’s wrestling has improved as much as his former teammate Nicky Ryan’s.

It’s undeniable that Dante Leon is one of the most exhilarating grapplers to watch.

Dante Leon’s game primarily focuses on wrestling up, scoring his points, and then submitting his opponent’s— rarely does the Canadian rest on his laurels.

Leon enjoys scrapping, and he continually scrambles to ensure his opponent never has a moment to rest. Leon also favors his hefty and technical knee-cut pass, which allows him to keep immense pressure on his opponents until he scores his points.

This is precisely why Dante Leon has a good chance of defeating Oliver Taza.

favors lower body submissions— to a defensive and

Oliver Taza is teetering on the brink of excellence.

In just over two years, he acquired his brown belt and took 2nd place at the 2016 ADCC East Coast Trials. That said, it’s become apparent since 2016 that Oliver Taza’s game has become primarily based around lower body submissions.

This means his greatest strength is also his greatest weakness— he has two inherent vulnerabilities, his lack of top pressure and overreliance on leg locks.

For the past three years within the Jiu-Jitsu community, it’s become a fait accompli that you can neutralize a leg locker if your lower body defense is solid and tactically overcome using top pressure and passing skills.

In other words, Dante Leon is not a good match-up for Oliver Taza. Taza’s record evidences that many of his losses come from competitors who understand the complexity of leg locks.

These competitors tend to shut his game down by

When you distill these factors down to their core, you realize unless Taza has improved his top pressure and his “anti-wresting” abilities, he may lose to Leon.

Let me repeat, Oliver Taza is a superb lower-body submission specialist. If he gets anywhere near your heel and catches your knee line, he will submit you.

This is precisely why most of his wins come via heel hook. Ultimately, he submits, while not getting submitted— thus, embodying the true essence of submission grappling as a professional martial artist.

Granted, Taza has been training with (the former) DDS, Tristar squad, and now the (new) New Wave Jiu-Jitsu team; we are all aware of how dangerous he is if he clamps anywhere near your legs.

Furthermore, Taza has an outstanding defense. The teams listed above implement an escape-oriented training style which is why Taza does not get submitted— his 22 losses are via points.

If Dante Leon allows Oliver Taza to maintain inside position for a moment too long, we may see Leon lose his foot.

I forecast Dante Leon will get the victory via points. Statistically speaking, Leon won’t submit Taza, but he most likely will win.

Oliver Taza will elect to play bottom and doggedly barrage Dante Leon with leglocks, which Leon will counter with a dominant top position.

Ultimately, gained the victory via top pressure and immense control. But I could be wrong; this is a combat art where anything can happen.

We may see Oliver Taza’s game evolve… That’s my prediction, what’s yours?