Kody Steele entered his professional debut after 2-straight KO victories in the amateur circuit, and was able to come out with his hand raised.

His fight didn’t go exactly as planned, expressing discontent about his performance in a post to Instagram,

However, even though he didn’t finish his opponent, he clearly led the dance as two judge’s scored the fight 30-27 in his favor.

This time around, Kody chose to bring out the grappling with an early takedown in the first round but ended up defending a guillotine inside Jesse Gangler’s closed guard. Steele escaped and postured up, landing some ground and pound before getting his neck tied up again, but of course was able to escape and stand up. It was clear that Gangler was eager to jump on the neck of Steele, but his attempts weren’t very effective.

A big right hand from Steele was the biggest moment of the first round, and he came away with two takedowns and a bit of control time.

Round 2 was quick to the ground after another Steele takedown that made Gangler attempt another guillotine, this time holding on even as Steele passed into ¾ mount. As Steele further passed to full mount, Gangler survived by breaking Steele’s postures and shrimping until his back was against the cage and he eventually came back to his feet. Steele took the time to showcase some of his muay thai, opening his opponent up with elbows and knees, but Gangler was tough and landing some strong shots in return.

As Steele threw effective strikes, he perfectly timed a takedown to come on top and finish the round on top in half mount.

Round 3 started with a hug and mutual respect between the two, and then a muay thai battle of power shots. A little over a minute into the round, Steele timed another takedown to again land in top-half. Gangler tried to go for the neck again, but wasn’t able to do much with it besides use the position to bring his back against the cage. As Steele worked for the guard pass, Gangler wrapped up a single leg and reversed the position so that he was on top and Steele’s back against the cage- his best moment of the fight thus far.

Our first time seeing Steele on his back, Gangler dragged Steele away from the cage and toward the center of the mat. In the process, Steele improved to a closed guard. Gangler used a can opener to open the guard, and Steele swung his hips around and a leg over Gangler’s head for an armbar- forcing a scramble that led to a sweep for Steele and him coming back on top.

With two minutes left to work, Steele passed to knee on belly and forced a back take. As Steele landed some ground and pound, Gangler was able to buck him off and grab for a single leg. This time, it was Steele attempting a guillotine, using the position to stuff the takedown. The two engaged in a brief clinch before Steele secured another takedown, which Gangler defended with an unsuccessful kimura attempt. After a brief dogfight, Steele took the back as Gangler turtled with just :30 seconds left. In the last ten seconds, Gangler was able to stand up and cause Steele to slide off of him. Steele immediately shot for another takedown and slammed Gangler, yet again landing in a guillotine from closed guard as time expired.

Steele sang praise to Gangler’s toughness, who has been in 17 professional fights. “He’s super tough… I’m pretty comfortable [defending guillotines]. Honestly, I thought he was just gonna gas his arms out, but he kept with it, so good on him.” 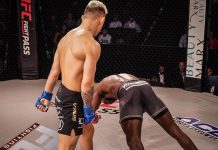