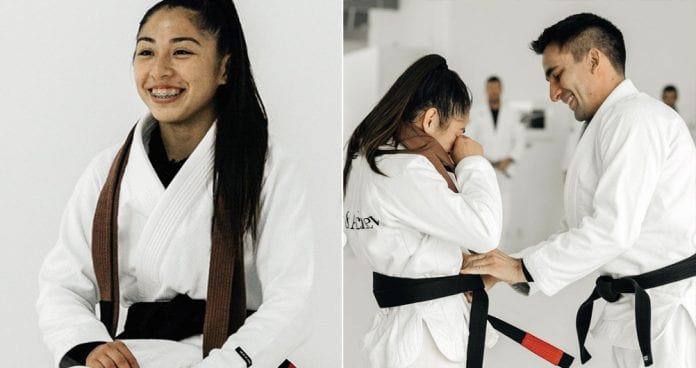 After blazing through the colored belts and collecting plenty of gold along the way, Art of Jiu-Jitsu standout Jessa Khan has officially earned her black belt.

Khan has been training since she was little, and since she became old enough to earn her blue belt, she’s been dominating virtually every tournament she’s entered, collecting championship titles at Worlds, No-Gi Worlds, Pans, and the World Pro throughout her time as a colored belt athlete. She was still a purple belt at this time last year, but during her short time as a brown belt (which she earned at the top of the podium at the Long Beach Open last November), she made a big impression, adding a first-place finish at Euros to her lengthy resume.

The Mendes brothers shared a congratulatory post to announce the big news, adding that Khan was their first black belt to come from the AOJ kids’ program.

“black belt day for 18 year old @jessakhan – first black belt from aoj’s kids program – multiple time world champion in the colored belts and ready to start her run in the black belt – this girl represents the new generation of young athletes who started training as little kids and chose to be professional athletes at young age, fully committed to be the best I expect nothing less than greatness for her future – I am proud of you Jessa, bring your well rounded, aggressive and beautiful jiu jitsu to the black belt division and reap the fruits of your work.“

There will be a lot of eyes on this young black belt as she works to get an impressive start on her black belt career, but given what we’ve seen from her over the years, she’ll certainly be ready for it.