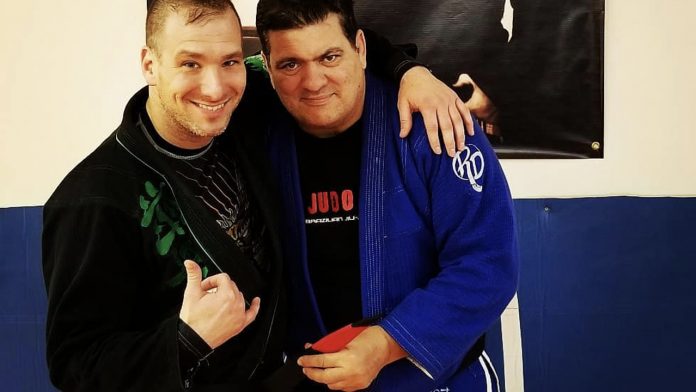 If the name Adam Nadow sounds familiar, there’s a good reason for it. The jiu-jitsu black belt of Fudoshin BJJ in Oregon has been in the news a few times, first when he subdued a man who attacked him in front of his own gym and then when his own gym was sadly vandalized back in May.

Nadow recently used his jiu-jitsu abilities in the streets again, this time to protect both a suspect and a police officer who were involved in an altercation that he witnessed.

This is what Nadow told the Jiu-Jitsu Times about the lead-up to the interaction:

“From what I saw, the suspect was across the street in an altercation with a lone female officer. I saw flailing arms and hands followed by yells; of course, this caught my attention. He got loose from her, and I watched as she tried to catch up on her cruiser. After he cut a different direction, I saw her pursue on foot a bit behind. I tracked the suspect until she arrived. He stood on his heels realizing he was boxed in.

“[The officer] became scared and threatened to tase him, already being bested once. It looked like he pulled his fist back to hit the female cop. I saw an opportunity and wanted to avoid injury from him falling and hitting his head after the taser… or I was worried the taser would not work, and she would panic and pull her lethal [weapon].”

After Nadow had taken the suspect down, officers were able to put the suspect in handcuffs and take him away. Nadow says that the Medford PD sergeant confirmed that the man had been arrested for outstanding warrants and resisting arrest.

The body cam footage below is said to begin at the point when the police officer was trying to catch up to the suspect in her vehicle.

Though Nadow is obviously a skilled jiu-jitsu practitioner and no one was seriously hurt during the incident in question, the Jiu-Jitsu Times does not condone getting involved in outside altercations due to the risk toward all involved parties.