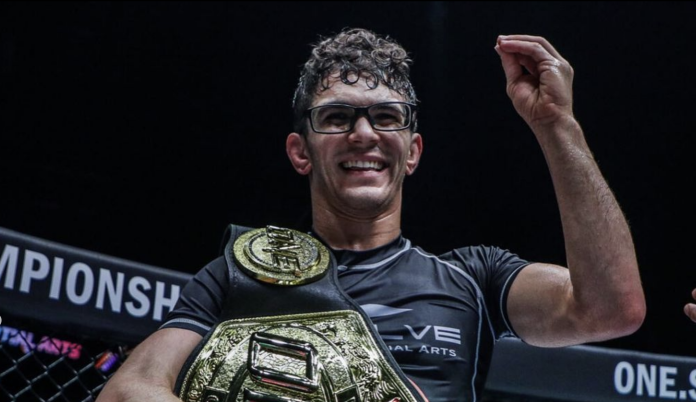 When Mikey Musumeci claimed the inaugural ONE Championship submission grappling belt on October 1 – after victoriously concluding a trilogy-spanning rivalry with Brazil’s Cleber Sousa – his first matchup request was for the legendary Demetrious “Mighty Mouse” Johnson.

And it really was just that – a request. “Darth Rigatoni ” made that much clear, explaining in no uncertain terms during his post-match interview that he didn’t believe it appropriate for himself to “call out” a fighter of Mighty Mouse’s caliber. All Musumeci wanted was to make a “respectful request to roll.”

That’s classic Mikey for you. The Italian-American grappling superstar has rightfully built his fame off a tremendous talent for jiu-jitsu, and a work ethic to match – but he’s put equal effort into cultivating a culture of generosity within the sport. When I catch up with him during his latest round of post-match press obligations, he’s smiling brightly, and fresh off a call with a Portuguese-language news outlet.

And yes, that interview was conducted entirely in Portuguese. “I always speak Portuguese with my Brazilian opponents,” Mikey tells me. “So, after Cleber and I competed, I was telling him [in Portuguese] what an honor it was to compete with him, and we were both just being really respectful.”

“When I was a kid, I used to be horrified whenever I had to fight Brazilians!” Mikey confesses with a laugh. “Whenever I signed up for a tournament, and saw someone with like five names, I’d go, ‘Oh s**t, there’s a Brazilian in my bracket, oh no!’ I guess when you come from a certain country, it’s easy to see everyone else as being so foreign, but when you start learning other languages and experiencing other cultures, it’s easier to find common ground – it kind of connects us all together.”

“After I learned Portuguese, the Brazilians kind of started treating me like one of their own,” he continues. “And they really are taken aback that I spent time learning their language, so they show me a lot of respect for that. We’re doing their sport – because Brazilians brought jiu-jitsu to America – and we always force them to learn English, so I feel like we should do them the courtesy of learning their language too.”

That generosity of spirit – and the value he places on respect and kindness among athletes – is also why he’s fighting so hard for ONE to make its mark on the jiu-jitsu world. “In ONE Championship, it’s all about respect, with the athletes,” says Musumeci. “It’s about martial arts and respect. So it’s a better energy. It’s not that kind of a**hole energy you sometimes see in America.”

Understandably, he’s not entirely satisfied with the performance that won him his first ONE belt – mostly because he didn’t win by submission. “I was very disappointed with my performance,” Mikey admits. “I honestly was horrified, being in front of so many people.” He shakes his head, laughing and still looking more than a little embarrassed. “I was running for hours before the fight because I had so much adrenaline. I couldn’t stop, so I was backstage before the fight, just running in circles. I’m probably going to die younger, just from the nerves! It’s the coolest experience ever, though – I just have to adapt to it.”

On a more businesslike note, he adds, “In my mind – I wanted to finish [Cleber Sousa] by submission, of course – but I know that according to the rules, whoever has the most submission attempts, or ‘catches,’ wins the match. So I had to attack him the whole time for submissions – I think I went for six different attempts. But he never really attacked me for a submission. So, it was a great match, but I would have liked to see him attacking more submissions as well.”

He doesn’t place the blame entirely at Sousa’s feet either. “I should have changed gears and started trying to sweep him, and take his back, and do other things,” says Musumeci. “Like, I kind of got there at the end, but the adrenaline definitely hit me hard. It’s a weird feeling, when you get so much adrenaline at once, but I did my best to adapt to it during the match.”

“I’m still so happy I had a long ten-minute match in ONE, with so many people, with all that adrenaline,” he continues. “Because now I’m going to adjust so much better. So in the future, when I have a match – for example, with Mighty Mouse – I will be adjusted to that experience. With someone like Mighty Mouse, it would be an even bigger match, with maybe double the audience, so I need to adapt, and fast. And I needed a war with someone high-level like Cleber, to adapt to this format.”

Musumeci is primarily famous for his highly dangerous guard game – but he’s also known for constantly innovating his grappling arsenal with new and improved weapons. ONE grappling roster-mate Danielle Kelly has previously speculated that it could be interesting to see Mikey eventually adding more wrestling to his competitive repertoire.

“So, something people don’t really know about me is that when I was a kid, I did a lot of wrestling,” Mikey reveals. “I actually got second place in the Seahorse State Championship in Florida. So I have a wrestling background. Technically, I’m not really bad at wrestling – I just feel like it’s a waste of time for me, because my goal is to submit the person. So I really don’t like wasting time standing and trying to take the person down – I’d rather get to work immediately on submissions.”

In other words, under the current ruleset in which he competes, Mikey’s reluctant to spend too much time on the feet, when he has the option of using his guardwork to shortcut directly to the submission entries where he’s most dangerous. “My whole goal is to attack submissions every second, so I feel like if I was wrestling, that would take something away from the time I have to hunt those submissions,” Musumeci elaborates. “Maybe if I was in a no time limit sub-only match, where I have as much time as I want to just have fun, I’d [wrestle more] – but in a ten-minute window where I have to submit the person, I need every second possible to get that done.”

Of course, that game plan might change, depending on the ruleset under which he faces Demetrious Johnson. If the matchmakers call for a mixed-rules bout that incorporates MMA rounds between submission grappling rounds, we’ll likely see Musumeci dusting off those old wrestling chops – not to mention his rarely-mentioned Muay Thai training.

Does the prospect of mixing things up – and potentially getting more serious about striking – faze Darth Rigatoni at all?

“I’m a ONE athlete, so whatever they want us to do, we’ll do,” says Mikey. “So, if tomorrow, I have to go to the gym and start doing Muay Thai, I’m in Singapore at Evolve, which is probably the best Muay Thai gym in the world, with the best fight instructors. So we’ll see what they decide.”

Ultimately, what Mikey really wants is a chance to shape the history of grappling and combat sports as a whole. “I just want to be a part of history with Mighty Mouse,” he explains to me. “I’ve already won all the titles in my career that I wanted in jiu-jitsu. Now, the only thing left for me is to have an impact on our generation – and I know that this match would have a big impact.”

Curious about what else Darth Rigatoni has to say? Read our previous interview with Mikey Musumeci here: Mikey Musumeci Talks Inaugural ONE Grappling Belt, Professionalizing BJJ, and His Pick for ADCC -66kg Champ

Did you miss all the action between Mikey Musumeci and Cleber Sousa at ONE on Prime Video 2? Check out our recap here: Mikey Musumeci Becomes ONE’s First Grappling Champ, Makes “Respectful Request to Roll” With Demetrious Johnson