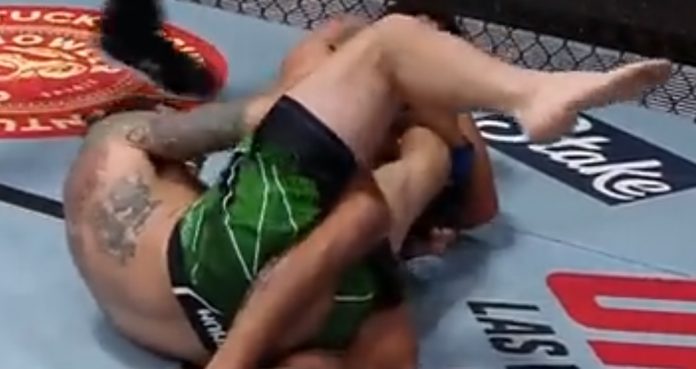 Claudio Puelles, a purple belt in luta livre, earned his 2nd straight kneebar finish on Saturday night’s UFC card with a win over Clay Guida. He now has 4 kneebar finishes and 7 submissions total in his career.

In his post-fight interview, Puelles told Daniel Cormier that he doesn’t really practice the kneebar,

The fight hit the ground within a minute as Guida shot for a single leg, but Puelles was quick to jump on a guillotine and pull guard. Puelles showcased some smooth grappling as he transitioned from a triangle attempt, to armbar attempt, omoplata, back to triangle attempt, into a tight armbar, and another omoplata where the two finally hit a brief stalemate. Puelles peppered some shots at Guida, encouraging a quick scramble that led to Guida’s escape.

However, Puelles maintained z-guard and jumped onto Guida’s leg as soon as he saw the opportunity, leading to a quick tap from Guida. One of the smoothest moments of the night.

One of the slickest kneebars you will ever see 🔥