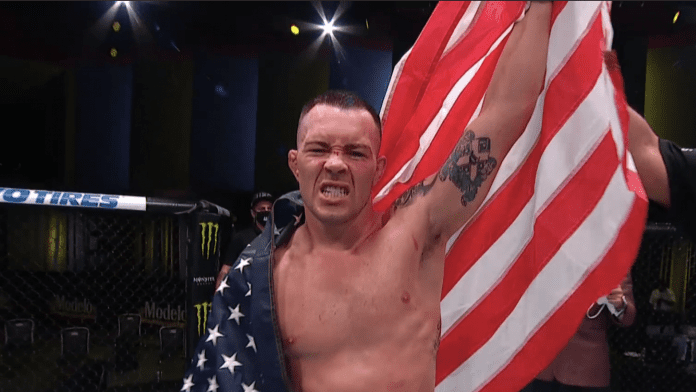 The main event of UFC Fight Night: Covington vs. Woodley ended on a tough note for Tyron Woodley after an apparent fifth-round rib injury against Colby Covington.

[ Tune in on #ESPNPlus now ] pic.twitter.com/ZyP32u5baW

Woodley came in on Covington a bit more aggressively at the start of the second round, and Covington followed up a flying knee attempt of his own by pushing Woodley against the cage again. Woodley scooped up a single-leg and got Covington to the ground, and as Covington came back up, Woodley attempted a guillotine, which Covington was able to defend against. Woodley made a noticeable effort to land more strikes and was successfully able to dodge a number of Covington’s own kicks and punches, but Covington was able to land a big right hand on his opponent. Woodley went after Covington again with a quick punch just before the end of round two.

Though Covington and Woodley both came in strong at the start of round three, the action was paused in just seconds after Covington hit an accidental eye poke on his opponent. Woodley was able to return to the fight, and the referee reminded both fighters to keep their fingers closed. Covington wasted little time in pushing Woodley up against the cage again, managing to scoop up a leg to try for the takedown, and Woodley retaliated by freeing his leg and landing a few knees to the body. The fighters remained in the clinch position for the remainder of the round, with Woodley breaking free only in the last few seconds.

Covington opened the fourth round with a strong kick to the head, soon pushing Woodley to the cage once again. Woodley defended with a guillotine to keep Covington from taking him down, but the strategy only lasted for a few moments, and Covington brought Woodley to the ground and ended up in his guard. Covington stayed aggressive in Woodley’s guard, landing a series of punches to the body as a cut opened up on Woodley’s face. Woodley’s arm was trapped underneath him, and Covington used the opportunity to land a hard punch to his face. As blood continued to flow into Woodley’s eyes, he pulled Covington closer to him to prevent further damage, and the fight moved into the fifth and final round.

“I WANT MY BELT BACK!” 🏆@ColbyCovMMA is on the hunt for gold.

Covington again shot for a takedown in the opening minute of the fifth round, and Woodley defended with a guillotine once again as he went to the ground. After a few moments, though, Woodley cried out in pain, indicating that his rib was injured. The fight was called, and Covington was declared the winner