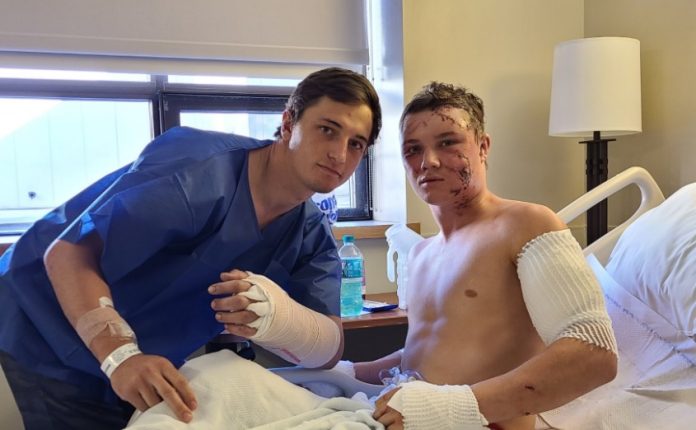 Northwest College wrestlers Kendall Cummings and Brady Lowry narrowly survived a surprise grizzly bear attack this week, per reporting by Cowboy State Daily’s Leo Wolfson. While many a  joke has been made at the expense of the alleged 6% of Americans who believe they could win an unarmed fight with a grizzly bear, the life-threatening ambush that Cummings and Lowry suffered might make some of those poll respondents think twice.

According to the Cowboy State Daily story, Cummings and Lowry had been hunting with their teammates in South Fork after a Saturday morning wrestling practice. Both wilderness-savvy and armed with bear spray, they separated from the rest of the team for a brief period of time to hike up ahead.

That’s when the grizzly emerged on a mountain path without warning. The animal slammed into Lowry and tackled him to the ground before he could reach his bear spray.

Cummings sprang into action. When shouting and throwing objects didn’t dissuade the bear from its attack, Cummings grabbed the grizzly by the ear and attempted to physically yank it off Lowry.

That got the bear’s attention. It reared up and charged Cummings, who survived a brief struggle in the bear’s jaws, before it backed off unexpectedly. The grizzly continued to stop and start its attack for several harrowing minutes, before it finally appeared to lose interest. When it became clear that the grizzly had finally departed their immediate vicinity, the boys shakily embarked on a five-mile trek back down the mountain.

Though both suffered severe injuries, they eventually reunited with their teammates. The other wrestlers carried Cummings and Lowry on their backs until they reached emergency responders.

According to Lowry, Cummings saved his life. “I can’t even express how grateful I am for [Cummings],” he told reporters at Cowboy State Daily. “I don’t know what I’m going to pay him back, I don’t. I owe him everything.”

Though both had to undergo major surgeries, they’re grateful for their lives, and for the fierce support of their teammates, who remained at their sides at the hospital past midnight.

Lowry’s father Dallas, a wrestling coach himself, told Cowboy State Daily, “College athletics is where these boys turn into men and they adopt these brothers that they never leave, for the rest of their lives they’ll remember these things. College athletics does a lot of things for kids for education, but it also does a lot of things for a young man’s memories and friendships. The power of athletics in college … it teaches them life lessons that they’re able to tackle a problem like this and walk away from it.”

For more details on this incident, read the full story at Cowboy State Daily.