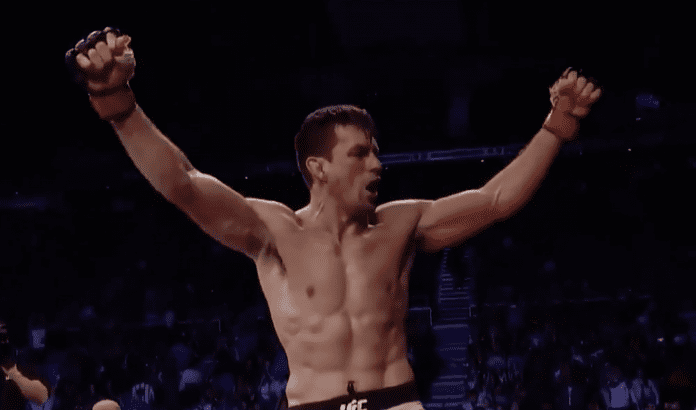 The king of MMA grappling has been crowned.

Demian Maia submitted Ben Askren in round three of their bout at UFC Fight Night: Singapore. The highly anticipated match between such accomplished grapplers lived up to the hype, with both men exhibiting some of the highest levels of ground technique to grace the octagon in recent years.

Round one began with a surprising amount of standup, with Maia keeping Askren at bay with straight lefts and Askren failing to close the distance. Askren also exhibited improved striking of his own, scoring several punches to the head and avoiding taking serious damage from Maia. It was only with under a minute left that the grappling came into play, with Askren scoring a body lock takedown and working to mount. Though Maia did solid work off the back, attempting an arm lock that puttered out before the match ended with Askren on top.

Round two started the same, with Askren scoring a left uppercut and Maia again responding with his straight left. With a minute left Askren again gets the takedown, but Maia is quick to threaten the triangle followed by an omoplata attempt causing Askren to roll out. Maia gets the sweep, and moves to take Askren’s back before Askren scrambles out to sweep Maia. The match ends again with Askren on top.

Round three saw Askren pressure Maia to the cage almost immediately, looking for a single leg. This aggression bore fruit as Askren scored his third takedown of the night, but Maia was able to sweep into Askren’s guard and threaten a leg lock. Askren scrambled to reclaim his leg but gave up his back, allowing Maia to sink in a body triangle. From here Maia peppered Askren with shots to the face, creating holes in his guard to establish an RNC. From here, Askren was only able to tap a sigle time before appearing to lose consciousness. Maia was declared the winner at 3:54 of the round.

“I think myself and him, are the best grapplers in the game,” Maia said in his post fight interview. When asked who he’d want next, Maia named longtime contender Diego Sanchez.

This brings Maia’s winning streak to four and leaves Askren at 1-2 in the UFC.