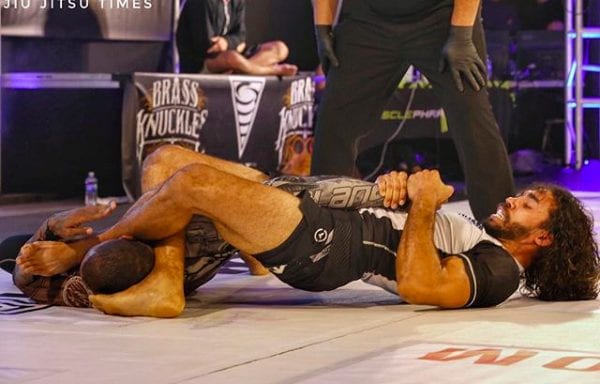 After several trials runs with smaller brackets, the first ever full sixteen-athlete Combat Jiu-Jitsu tournament debuted last Saturday at EBI 17 on the Muscle Pharm sporting complex mats in Burbank, CA. The stakes were set high for sixteen of the finest submission grapplers in the world to display their particular brand of carnage live on UFC Fight Pass. An exciting event could help springboard CJJ onto the main stage to stay, so there was a lot riding on their performance. Fortunately, these warriors came ready for the challenge and rose to the occasion.

While the new venue may not be as grand as the show’s previous home at the historic Orpheum Theater in Downtown LA, this event still managed to attract several high profile members of the fighting world. In addition to the usual 10th Planet stars like Geo Martinez, Richie Martinez and occasional EBI commentator and Eddie Bravo black belt Scott Ross, UFC middleweight fighter Kelvin Gastilum and welterweight Alan Jouban also showed up to check out the buzz on this exciting new sub-only format with strikes.

Right out of the gate, UFC veteran Josh Neer showed quickly and assertively why palm strikes change the dynamic of the action. He pummeled Nick Green with clubbing slaps to the face and torso until finally passing his guard and finishing with a powerful straight arm-lock from side mount. Brown Belt Hunter Colvin also showed impressive submission attacks with a very game performance against highly regarded Filipe Fogolin. Previously unknown grappler Dan Martinez also made a name for himself with a strong showing by advancing to the semi-finals and becoming a fan favorite of the arena.

The match of the night, however, belonged to Kyle Chambers and Felipe Fogolin’s epic quarter-final war. These two combatants seamlessly combined strikes for positional advancement with submission awareness in a constant ebb and flow for control of the action. Displaying equal components of technical beautiful and toughness, Kyle’s overtime victory showed why he is near the top of the list of submission grapplers on the circuit today.

The real star of the event was Jon ‘Thor’ Blank. His systematic destruction of the competition seemed too easy on his way to finishing all of his opponents in regulation with a variety of attacks (armbar, heel hook, guillotine, and an RNC), and with a combined total mat time of 7:38, he also become the most efficient EBI grappler of all time.

This weekend’s event could prove to be a historic occasion in the future direction of jiu-jitsu’s progression. Some critics of CJJ say that adding slaps stifles the artistic flow of the athletes, resulting in a lack of creativity and boring matches. Others feel that CJJ is just a softened down version of MMA — it’s not really a fight or grappling match so what’s the point? But one thing is for certain: no critics can deny the quality of completion displayed by these athletes on a very big stage with a lot at stake.

This show did not disappoint.

On a personal note, why not support something entertaining and new that will breathe fresh air into our art? Combat jiu-jitsu unquestionably changes the strategic dynamic of a match. But it’s still grappling, and every day, Eddie Bravo is working to fix the loopholes that contribute to slowing the action down. He is passionate and excited about making this format work, and in doing so also encouraging a new audience of people that don’t do jiu-jitsu to get excited about the sport and tune in. After all, not everyone is going to know what a gogoplata or kimura is, but a windmill slap to face will keep anyone watching.