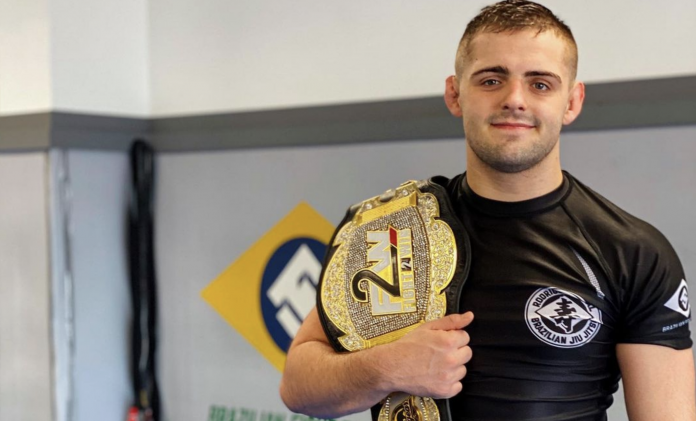 Fight 2 Win kicked off 2021 with a banger of an event at F2W 160, capping the night off first with a co-main event featuring Jonnatas Gracie vs. Hugo Marques and then a main event with William Tackett vs. John Combs, the latter of whom replaced Vagner Rocha.

Marques started the action by pulling guard, Gracie applying heavy top pressure as Marques tried to sweep him. As Marques scooped up a single-leg, Gracie opted to pull guard, eventually managing to come back up as Marques worked for single-leg X. After heading out of bounds, the competitors were reset, and Gracie again pulled guard. Gracie then went for an ankle lock following a brief scramble, and Marques kept a grip on the pants and Gracie’s leg wrapped up in his other arm.

Gracie then adjusted and went belly-down for the straight ankle lock while Marques tried to counter with the same. Eventually, though, Gracie gave up on the submission, though the competitors returned to the 50/50, staying there without much action until the final few seconds of the match when Gracie stood up and went for a toe hold. He didn’t finish the submission, but his efforts during the match were enough to earn him the split-decision victory.

Tackett pulled guard, then reversed the position. Combs countered with a guillotine attempt, then a scramble led to Tackett trying a guillotine of his own. After going out of bounds, the competitors were reset, and Tackett returned to playing guard, digging for Combs’ leg. Combs, however, defended very well and started trying for a straight ankle lock, even as Tackett began working on a calf slicer. The athletes disentangled themselves, and Combs returned to trying to pass Tackett’s guard, avoiding a heel hook in the process.

Combs stayed low in his passing attempts, and Tackett was relentless with his leg locks. Combs was ready for him, though, and he again managed to clear his knee line to stay safe. As the clock wound down, Combs and Tackett tumbled across the stage, with Tackett ending up in the top position. Both competitors went for straight ankle locks in the final seconds of the match, but neither was able to finish.

Tackett was awarded the split decision victory by the judges.