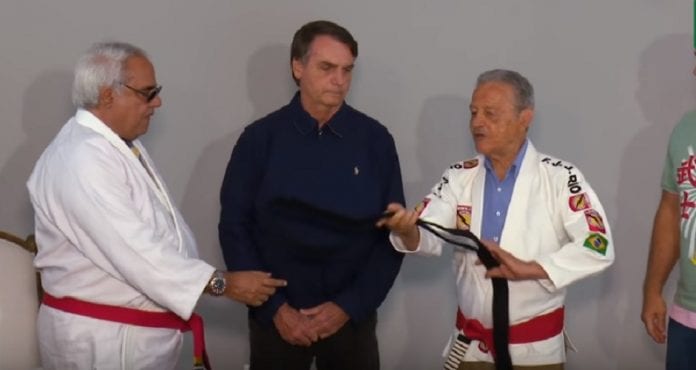 Jair Bolsonaro, who is a far-right candidate and favorite to win Brazil’s upcoming presidential election, was given an “honorary” black belt in jiu-jitsu yesterday by Robson Gracie.

The Partido Social Liberal (the political party Bolsonaro belongs to) posted a video of the ceremony. It is unclear if Bolsonaro has any experience training in Brazilian jiu-jitsu, but he has received support among prominent figures in the sport. Roberto “Cyborg” Abreu has posted his support for the candidate alongside fellow black belt and teammate Denis Batista Pinto.

Bolsonaro himself also filmed a clip of himself sending a “hug” to the Ryan Gracie BJJ team a couple of years ago.

Bolsonaro has been a controversial figure amidst a polarizing political climate in Brazil. His supporters believe his policies will help improve the Brazilian economy and reduce violence and crime. However, his policies and comments towards women, the LGBT community, and immigrants have drawn criticism and outrage — he once said that Federal Deputy Maria do Rosario was “not worth raping,” that he would prefer a hypothetical gay son of his to “die in an accident”, and that “…if your child starts to become like that, a little gay, you take a whip and you change their behavior.” Bolsonaro has also voiced support for Brazil’s military dictatorship (which ended in 1985), calling it “glorious” and that its error was “torturing and not killing.”