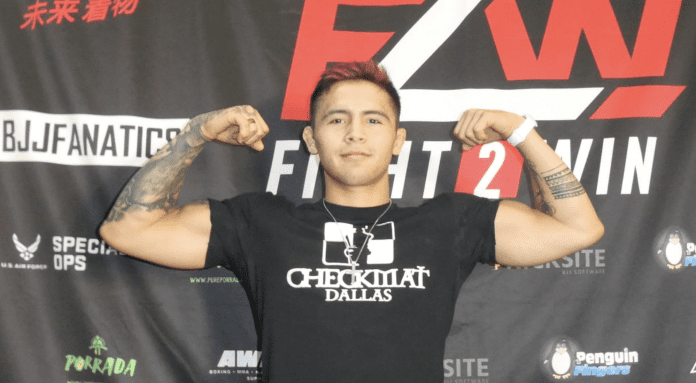 F2W 153 brought us another night of incredible jiu-jitsu action from Dallas, TX, with a main card that featured multiple fast-paced, technical matches to showcase some of the best BJJ in the country.

The co-main event of the evening saw Junny Ocasio and Marcelo Cohen face off in a no-gi match for the middleweight title.

Both competitors immediately pulled guard, with Ocasio coming up before sitting guard again as Cohen came up momentarily before entering into a leg entanglement with his opponent. Ocasio grabbed for a leg before changing tactics and sliding past Cohen’s guard. Ocasio again sat back, this time managing to secure a heel hook grip. Cohen tried to roll out of it, but Ocasio had a tight grip and quickly got the tap. Ocasio got the win and retained his middleweight title for F2W.

In the main event of the evening, Gianni Grippo took on up-and-comer Sam Nagai in the gi.

Grippo immediately pulled guard, going for a pant leg as Nagai secured a straight ankle lock grip. Grippo briefly tried to come up, and Nagai sat back again for the ankle lock. Grippo managed to get his foot free, but Nagai was able to keep a hold of his opponent’s pant leg. Grippo got to his feet and worked to pass the guard. Nagai briefly stood up, then went right back to playing guard on his terms as Grippo tried to pass. Nagai managed a sweep, but seemed to prefer to work from the bottom, and he returned to playing guard. With about three minutes left in the match, Grippo sat back for an ankle lock of his own, switching to a toehold as Nagai got his foot free. Grippo came back on top, then soon went belly-down for an ankle lock as his opponent did as well. Nagai went for another straight ankle lock as the clock wound down, and Grippo wasn’t able to counter with anything significant.