The last time Nikki Sullivan was competing at the UAEJJF Abu Dhabi World Pro was five years ago. She was a blue belt out of a small gym in Indiana, and this was her first time competing out of the country. As she puts it, she didn’t know anyone, and no one knew her. All around her were athletes who were elevated to celebrity status in the jiu-jitsu community, and then there she was — a “small fish” swimming amongst the Keenan Corneliuses and Mackenzie Derns of that year’s competitive pool.

This year, Sullivan is back, but she’s anything but the same competitor everyone looked over the last time she was in Abu Dhabi. Since her last appearance at the World Pro, Sullivan has moved out to California, and her jiu-jitsu career has skyrocketed. As a brown belt, she won American Nationals (in both gi and no-gi), Master Worlds, No-Gi Pans, and Fight 2 Win titles (in both gi and no-gi). “[Winning the F2W titles] felt special to me because I’ve been involved in F2W events since purple belt. I love their team, and having Missy [Estrada] put those two belts around my waist made me feel lots of happy feels.”

Now, though, Sullivan’s brown belt career is over — at the beginning of 2019, Andre Galvao presented her with her black belt, and she wasted no time in proving that she’d earned it by winning silver at both Pans and the ADCC West Coast Trials. The weight of the accomplishments isn’t lost on Sullivan. “Getting second at Pans in my first few months as a black belt felt pretty freaking special,” she says. “It wasn’t gold, but I’m still really proud of it. The female black belt divisions are no joke, and I didn’t even expect to medal. Also, more than medals, just finally being in a place where I can teach and train Jiu-Jitsu full-time is incredibly special to me. I risked a lot, made a lot of sacrifices, and worked very hard to get here, and I will continue to work my butt off.”

With her chance to prove herself at the World Pro just days away, Sullivan has been able to reflect on how far she’s come and how her perspective has changed with time. “[As a blue belt,] I won my first match, but lost in the semis, and then lost my match for third. I’m hopeful the results will be much better this time! It’s kind of exciting to be competing as a new black belt. There’s no pressure. I love being the underdog. I just get to go out there, have fun, and do my best. And I’m excited to do that at the World Pro.”

“I think this experience will feel a lot different this time than it did as a blue belt,” she adds. I have so many more friends in the competitive jiu-jitsu community now. I also have teammates going, so I think I will feel much more relaxed and at home on this trip. I’m actually really excited to see some of my international friends who I don’t get to see often.”

Sullivan’s perspective on both this competition and her BJJ career as a whole may seem lighthearted and easy-going, but her journey to this point has been anything but easy. “Coming from a small town and small gym, it was difficult to gain the confidence to believe that I could do this as a career,” she says. “To finally take the leap and move to California, it took encouragement from other people, a lot of faith, and finally deciding that my fear of failure was overshadowed by the regret I knew I would suffer if I never tried.”

At first, that leap of faith involved a bumpy landing. Sullivan says that when she moved out to San Diego, she’d just ended a two-year relationship, and the move required leaving behind all her friends and family. Combined with the work she was putting in to turn her dreams into reality, it was all a serious struggle. “I was training and working all the time. I was constantly feeling beaten down, physically and mentally, and I was also very lonely,” she says.

Sullivan has never been one to give up just because her situation isn’t ideal, though. She says that merely being a woman in jiu-jitsu has been a challenge in itself — a challenge that she is still fighting today. “I definitely felt the need to prove myself in order to be taken seriously as an athlete in the beginning,” she says. “Even today, I still run into men who overlook me because I’m a woman or think they can offer me a very small amount to come teach a seminar.”

Always goal-oriented, Sullivan stayed focused on what she wanted out of her move to California. Her quest to achieve her dreams still isn’t easy, but her positive outlook is helping her make it through the tough times. “I have days when I feel like a failure. I have days when I feel lonely. I have days when I can’t stop crying,” she says. “I get through these days because I believe it’s worth it. I have faith that I’m doing God’s will for my life, and He has never failed to provide for me. Often, the night is darkest before the dawn. I try to take time to step back and look at the bigger picture. I remember where I came from, and where I am today, and I feel an immense sense of gratitude. I get to do this. I’m living in San Diego and training jiu-jitsu as a career. I never thought this was possible for me. I am so incredibly blessed.”

Sullivan is certainly making the most out of the opportunities she’s earned. After the World Pro, she’ll be getting ready for IBJJF Worlds and keeping an eye out for any superfight opportunities (and, fingers crossed, a potential ADCC invite). She’s also looking to expand her teaching opportunities and will be teaching a “superseminar” in Columbus, OH on June 15. The jiu-jitsu world will also get the chance to learn from Sullivan in the form of a DVD about the “panda guard,” which Sullivan says she’s started to lay the groundwork for.

With years of athletic and emotional development behind her, Sullivan has some advice for anyone who’s also struggling on their journey, whether in jiu-jitsu or life as a whole:

“Focus on gratitude. Remind yourself what you are thankful for, because I promise there is plenty. Also, focus on lifting someone else up. Be an encourager. See if there is a way you can help someone else or make their day better. I find that when I can take my focus away from my own personal pity party and instead focus on brightening someone else’s day, it always makes me feel happier. It’s gonna be a good day, guys.”

As she prepares to take to the mats at the World Pro, the power of Sullivan’s strength, technique, and positive outlook will be put to the test. She’ll once again be at one of the globe’s most elite competitions, surrounded by some of the world’s top black belts. The difference is that this time, she’ll be one of them. 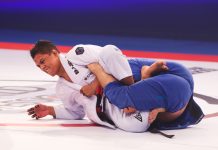 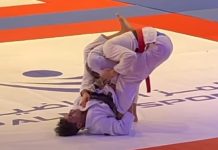 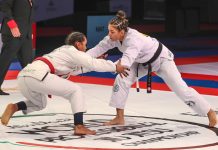 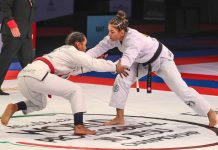 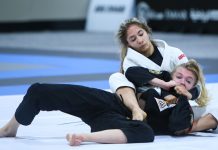