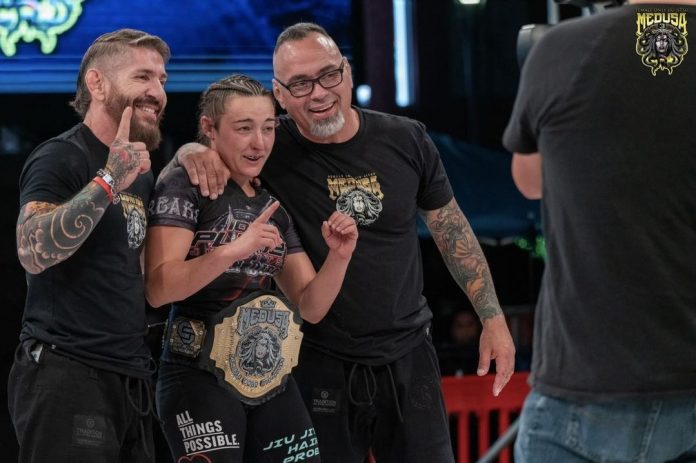 In the days leading up to her victory at Medusa 3’s combat jiu-jitsu showdown, MMA fighter and BJJ athlete Bre Stikk faced down five weeks that would exhaust most athletes: during that period of time, she competed in the ADCC Open – including the absolute, despite typically grappling as a 125-pounder – followed by the Medusa Trials, then two days in Spain competing in both gi and no-gi on the USA grappling team, before finally making it back to the States for Medusa 3.

Simultaneously, Stikk was dealing with a military divorce in San Diego that literally forced her out of her home. “I was actually in a dangerous situation, where I couldn’t even be in my home in San Diego for the last four months,” Stikk tells me. “I’ve literally been at my parents’, or at a friend’s house – I’ve kind of just been couch surfing, honestly.”

“I married someone who, over time, completely changed,” says Stikk of her ex-husband. “People have demons – or they gain demons over time.” Which, according to Stikk, only became worse with every deployment, particularly when he began to abuse alcohol.

“I saw him change as a man, completely,” says Stikk, all frankly-spoken honesty. “I stayed for too long because I thought he could be restored, and I believe in miracles, and I believe in prayer – and him eventually saving himself.”

The divorce represented a tremendous life transition for Stikk. The couple had been together for six years, and married for five of them. They’d faced four deployments, and countless training assignments. “[My husband] was gone for probably half the marriage,” she says. “And I was at home working, running the household, taking care of the dogs, training to try and get to the UFC. I was on my own path, and I became very emotionally independent myself. But it’s been the hardest transition of my life, for sure.”

“I did basically no preparation,” she confides, regarding her Medusa 3 performance. “Honestly, right now, I’ve never had this much instability in my life.”

Due to her dicey domestic circumstances, Stikk didn’t even have access to regular coaching resources. “I knew who unstable things were going to be, and how toxic, with the divorce,” she says, “but I just signed up. I made sure my name was in the bracket for Medusa Trials, and then I won the team spot in June for USA Grappling, so I knew I was going to Spain – but with Medusa, I didn’t know.”

“I’ve honestly been in a survival mentality,” she adds. “Like, ‘Get through this weekend. Get through Medusa Trials. Get through these matches.’ I’ve just had a lot of instability in every single possible way you can possibly imagine: where I’m sleeping, where my money’s coming from, where I’m training on any given day.”

Amidst the chaos, Stikk had to fall back on her experience and her training – and it paid off, in the form of the Medusa 3 flyweight combat jiu-jitsu belt.

Stikk’s no stranger to adversity, and she’s been a fighter since childhood. “I’m 29 now, and I started training at thirteen, because my family’s all blue collar – my dad does general contracting work for construction, and we were really broke when I was growing up,” she explains. “I didn’t get to do a lot of sports and stuff – I was too broke to get a letterman’s jacket, or a yearbook, or that type of thing. But my dad really wanted my brother to do some sort of combat sport for self-defense.”

As a result, Stikk’s father traded work as a welder to the local MMA gym in town, in exchange for opportunities for Stikk and her brother to train. “My dad was actually a really good wrestler – but he didn’t go to college, even though he could have gotten a scholarship, because he and my mom got pregnant with me,” says Stikk.

“The UFC started in 1993, and I was born in 1993, so I’ve also been watching UFC fights with my dad since I was tiny,” she adds. “He taught me how to blast double, how to single leg, how to choke, when I was a really little kid.”

Laughing, she recalls memories of grade school playground fights where she used to accidentally choke the boys in her class unconscious. “I would get in trouble all the time, because all the boys would always try to f**k with me because I was a tomboy,” she remembers. “So I would end up choking them or something, and dudes would be going out – and remember, we were in the sixth grade – so, I’d be like, ‘I’m sorry!’”

“They were always the ones punking me!” exclaims Stikk. “So I would just arm drag them, and I wouldn’t even really be trying to choke them. I’d just be holding their neck, and little boys would just be going out left and right.” She chuckles. “I probably put about five little boys to sleep by accident.”

Stikk’s father was unfazed by his daughter’s antics, but her mother was horrified. “My mom was appalled,” says Stikk. “She was really embarrassed that I was so rough, and the moms of the boys would call her and complain about it. My brother and I were nice kids, but when other kids tried to punk us, we wouldn’t put up with it!”

At sixteen, Stikk  took her first MMA smoker – against a teenage boy. “He was maybe a year younger than me,” recalls Stikk. “Honestly, he was one of my friends, and he wrestled at a big private school in our area – so he was a good wrestler, and he was also on their boxing team. So he was actually good. And it was a smoker, so we both technically won, but there are these pictures of me side kicking him, where he looks like he’s keeling over, and it looks totally sick.” She grins fondly at the memory. “There’s a couple funny pictures like that, and afterwards, somebody printed them out and put them all over the school.”

One thing led to another. Stikk went on to train in jiu-jitsu – both at 10th Planet, under Richie “Boogeyman” Martinez, and in the gi – alongside beach wrestling, striking, and MMA.

How did winning the combat jiu-jitsu crown at Medusa 3 feel, after all those years of hard work – not to mention the personal trials of the weeks leading up to the event? “I am so happy these five weeks are over,” Stikk tells me bluntly, laughing.

Thoughtfully, she adds, “It felt very spiritual, [winning Medusa 3]. My whole life, I’ve dealt with self doubt. Honestly, winning the belt – for me, it was this moment of ‘oh my god, I can do it.’ I’d been trying to get on EBI; I’ve been doing this for twelve years. I’ve fought ADCC, I’ve fought Ffion Davies at blue belt, no-gi worlds, finals, after five matches. I’ve fought Amy Campo in the absolute. I’ve fought Brianna Ste-Marie. So I’ve only lost to the girls who are the f**king best.

“I’ve been a paramedic, a firefighter, and a wife – and all those things took a lot of time and energy, and I’ve never been able to train like I wanted to. I was used to going to Worlds and never having a professor, and fighting Atos – and these girls who are famous online, and they’ve got a corner full of world champions. And I never believed I could ever be anything because of that. I didn’t have a coach, I didn’t have a world champion team, I didn’t have the financial ability to move to San Diego, or a jiu-jitsu mecca; I was really stuck in a small town mentality for a long time.

“So getting to Boogey – and getting to all these girls who are in LFA, in the UFC, in Bellator – that totally opened my eyes and my world to the realization that I can do this.”

Her future goals are twofold. In the combat sports realm, she’s shooting her shot at the biggest titles she can chase. “I’m going to get to the UFC or ONE FC at all costs,” she says. Impishly, she adds, grinning, “I’d love to get signed to ONE FC for grappling and for MMA – and I want to fight Danielle Kelly so bad!”

Still, she’s not missing the forest for the trees – and while Stikk may be as hungry to prove herself as the next fighter, there’s a whole world beyond professional combat sports that Stikk is determined to keep sight of. Outside of the cage, she intends to seek peace, stability, and the means to help others with whatever tools she has – including a new home she’s inherited from her grandmother, who recently passed. “I’m going to Northern California, and I’m going to live on a five-acre property with a two-story house, fifteen minutes from Sacramento, across from the rolling hills. There’s fishing, and wineries, and it’s seven hours away from all my friends and family.”

Stikk always sought to challenge those attitudes as an adolescent – and that drive has only increased as she’s matured.

Ultimately, Stikk wants to be more than just an athlete – she wants to be a source of support to other women who have survived difficult domestic situations and other forms of peril. “I figured out my anointing – what I’m supposed to do. This year in my church, I became heavily involved in volunteering, and I know that I’m supposed to use my physical skills to help girls and women with hope and trauma and finding purpose.”

“I just got sponsored by a ministry that’s called All Things Possible,” she shares. “They focus on dealing with trauma through physical and spiritual empowerment. The weekend before Spain, they flew me out, and I did twelve-hour days with them where I taught women self-defense, and I watched these girls get put in chokes, get triggered, cry, and then overcome it. And to see the growth in these girls over just two days was absolutely, insanely powerful. And these girls, their whole lives change from this one weekend.”

“I want to start a women’s retreat up on my property, now that I have those five acres,” says Stikk. “I want to build a training facility, and do similar stuff, now that I have resources like Vicky Vortex and all these incredible women who can come and do seminars.” She envisions a future where she can host both jiu-jitsu retreats and self-defense and women’s empowerment retreats – all while pursuing her own combat sports ambitions.

“I think you really need to open the limit on yourself,” says Stikk. “To say, ‘f**k it, I’m just going to show up,’ and see what happens.”

To learn more about All Things Possible and founder Victor Marx, check out the website.