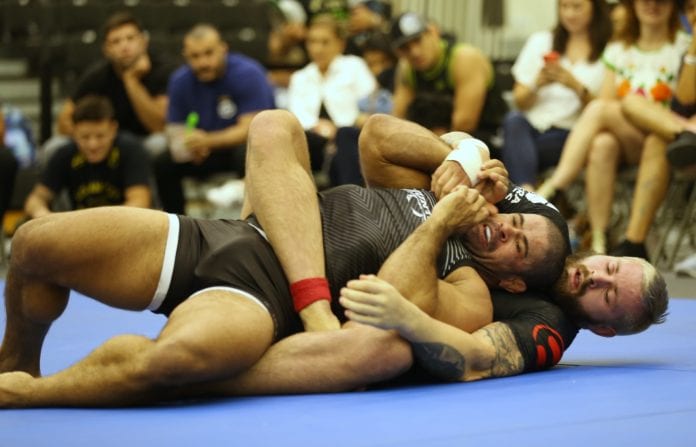 Continuing his reign of terror following ADCC, Gordon “King” Ryan defeated former UFC fighter and leg lock specialist Rousimar Palhares at this year’s World Jiu-Jitsu Festival in Long Beach California. The 15 minute war capped off the event and provided insight into what’s next for the king of ADCC.

The Danaher disciple began the match by pulling guard, followed by sweep and mounted triangle attempt on Palhares. Palhares slipped his head out and immediately attacked Ryan’s right leg, but inadvertently gave up his back to a quick body triangle by Ryan.

The match then became a back and forth of Ryan attempting to establish a choke and Palhares utilizing his massive traps and bear strength to control Ryan’s hands. This continued for the next 13 minutes, neither grappler being able to break the stalemate until Ryan released his triangle to pin Palhares’ left arm with his leg. With a minute left, Ryan made a final run at an rnc but failed to to cinch it in before the bell rang. Ryan was awarded the win on decision.

After a jovial embrace and display of respect between the two competitors, Ryan discussed his future match plans.

“I’ve got King of the Mat Grappling in two weeks. I’ve got Rudolfo Vieira, then Gabriel Gonzaga for Submission Underground. Those are my main focuses for right now, but we’ll see after the new year,” Ryan stated.

And so, the legend of King Ryan continues.