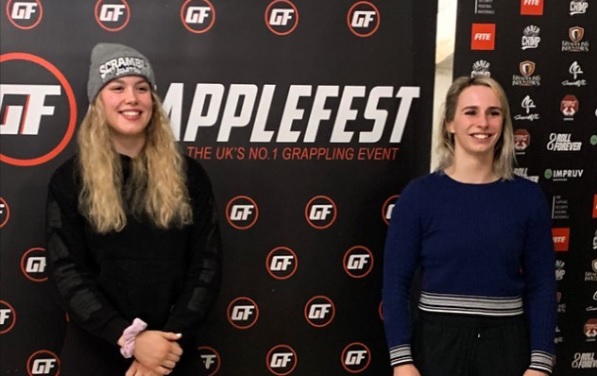 GrappleFest 11 brought the action during their Daisy Fresh vs. Europe event, showcasing some of jiu-jitsu’s best talent with high-intensity matches. As the night came to a close, Kendall Reusing and Ffion Davies faced off in a hard-fought match to see who would claim the open weight title, followed by a quick main event between Dante Leon and Mateusz Szczecinski.

Davies pulled guard and latched onto Reusing’s legs. Reusing latched onto a toehold, and Davies responded with an attempt of her own before Reusing abandoned the submission. Davies got to her feet and lifted Reusing’s leg high, nearly pushing the match into the crowd before it was returned to the mats. Davies returned to playing guard, and Reusing applied heavy pressure as she worked to pass. Davies attached herself to a leg once again, briefly going belly-down before Reusing managed to escape and returned to her guard-passing attempts.

With five minutes down and ten to go, Davies continued to try to control and elevate Reusing from the bottom. Reusing, however, was relentless with her pressure. Reusing then sat back and tried to work for a leg lock, and Davies seized the opportunity to come on top and work for a pass of her own. After getting past Reusing’s legs, Davies tried to isolate an arm, but Reusing was ready for it and defended to reclaim the top position. Davies positioned herself in single-leg x to isolate Reusing’s leg, and Reusing again went for a toehold that Davies defended.

Five more minutes remained, and Reusing resumed her guard passing attempts against Davies. Davies briefly trapped Reusing in closed guard and then switched to k-guard. Reusing broke free and went for another toehold. Davies defended again and got up to her knees for a moment. Reusing capitalized by slapping on a head-arm choke. Again, Davies defended and returned to working from guard as the clock wound down from the two-minute mark. With just over a minute and a half to go, Reusing locked on a d’arce. Davies’ defense held strong even as Reusing released and reapplied the choke. Reusing transitioned to mount in the last few seconds of the match, and Davies managed to hang on without tapping until the bell.

Kendall Reusing was declared the winner of the match by unanimous decision and claimed the open weight championship title.

Szczecinski immediately sat guard and tried to isolate a leg, leading to a scramble that nearly put the competitors into the crowd. After they were returned to the center, Szczecinski resumed playing guard, but it was mere seconds before Leon managed a quick and successful pass. He quickly transitioned to an armbar and finished the submission in the blink of an eye at two minutes and ten seconds into the match, claiming victory and the -80 kg championship title.