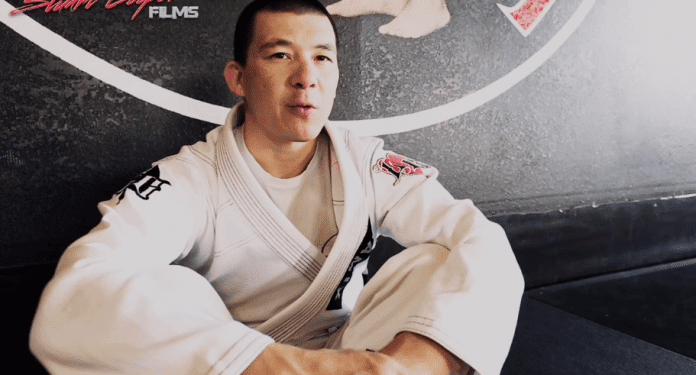 As stories of horrific violence come in from across the US and beyond, Rickson Gracie black belt Henry Akins has shared his own experience with law enforcement in Las Vegas as he and his family went for what was supposed to be a peaceful stroll.

Akins shared a post on Facebook days ago summarizing the experience and elaborated on what happened in a call with the Jiu-Jitsu Times. Akins said that he, his fiancee, and his 15-year-old daughter went to the Las Vegas strip for the once-in-a-lifetime chance to see the famous tourist hotspot so empty.

“I knew there were protests, but hadn’t heard about anything in Vegas,” said Akins. “There were only a few handfuls of people out by Mandalay Bay. I actually ran into a journalist for USA Today [later discovered to be a BJJ white belt himself], and we learned that there were protests, and police had allowed them to march.”

At some point, though, things got ugly. Akins and his family were walking back to the car when there was a shift in their surroundings.

“I guess the crowd got bigger and police no longer wanted people congregating, and they started using tear gas on the protesters. We saw police cars and started picking up the pace. There were police around where the car was parked, and everyone was going away from them, but we just wanted to get to the car and get home safely. I move forward, my hands are up, and they started shooting,” said Akins. “You hear pop pop pop and things exploding behind you. We ran and hid.”

Akins emphasized that the projectiles used were likely pepper bullets, describing the subsequent sensation in the air as “ground-up habanero pepper seeds in the back of your throat.”

“It was like a war zone — huge armored vehicles with guys in full SWAT gear carrying rifles. Before this, there was no curfew announcement, and then they started saying they’d arrest anyone they saw on the strip. But most of the people there are this point are locals just walking around.” Akins also recounted seeing 50 to 60 police cars and people being marched onto buses bound by zipties.

Thankfully, Akins and his family weren’t directly hit with any of the pepper bullets, and they finally made it back to the car after the police had left.

When asked if what he’d experienced had affected his views or opinions on the current events or the world as a whole, Akins said, “It’s had me question a lot. It has me sitting back and listening. There’s an overwhelming voice saying that this [experience] is normal for a lot of people, and we have to listen to those experiences.”

Akins also described the people he knows in law enforcement as “great human beings” and emphasized that he didn’t hold incidents of violence against the entire field of law enforcement. “As human beings, we can always do better,” he said. “I support law enforcement and know they have tough jobs, but what needs to change? You hear constant stories of police killing people unnecessarily with no action taken against them. I hope there’s a chance to fix their image.”

Akins closed with a message encouraging kindness and empathy. “We’re all in this together, and we have to come out together. Have compassion for your fellow humans. You never know what someone else is going through.”