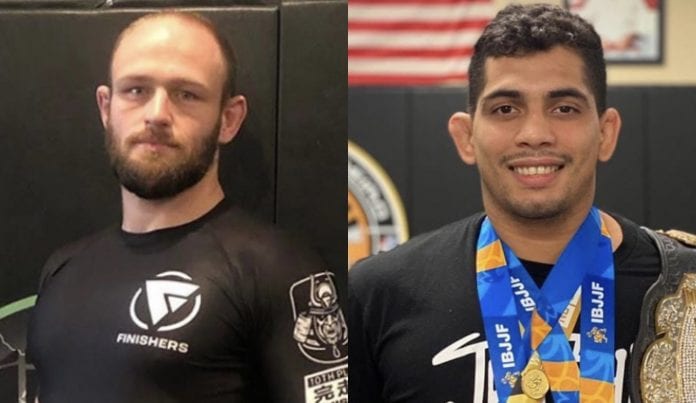 As soon as they got the ok to host events in Philadelphia, Fight 2 Win has come out with numerous match announcements for their October events. Now, in about a week, we’ll get to watch F2W 154, and the promotion has announced a main card you won’t want to miss.

Headlining the event will be a match between ADCC veteran Jon Blank and 2019 no-gi world champion Manuel Ribamar. Blank, a 10th Planet star, is an EBI Combat Jiu-Jitsu champion with wins over names like Roberto Jimenez and Adam Wardzinski. He currently has a 1-0 black belt F2W record, and he’ll be hoping to add another victory to his win column against Ribamar.

Ribamar, however, is a highly decorated black belt in both gi and no-gi, and he’s shown his prowess many times before on the F2W stage. He currently boasts a record of 6-1 for the promotion and recently took the black belt middleweight gi title at F2W 147. These two creative grapplers are sure to put on a show when they step up in the final match of the evening.

The co-main event will see another F2W champion take the stage as current bantamweight no-gi champ Junny Ocasio defends his title against Jose Carlos Lima. Lima is a Pans medalist who won the UAEJJF Abu Dhabi World Pro in 2018. He’s competed at two F2W events before, and he’ll certainly have a challenge on his hands when he faces the current champ.

Ocasio, of course, didn’t earn his title through luck. The Unity black belt is a No-Gi Worlds medalist and is currently sitting on a flawless 3-0 black belt record at F2W, and he’ll be pulling out all the stops to keep that record squeaky clean and retain his title.

Also on the card is a title match between three-division F2W champ Nathiely de Jesus and three-time world champion Maria Malyjasiak. Malyjasiak will be vying for one of de Jesus’ titles, but against an eight-time black belt world champion, that battle won’t be so easily won, even for a competitor of Malyjasiak’s status.

Fight 2 Win 154 will take place on Friday, October 16 and can be streamed live on FloGrappling.