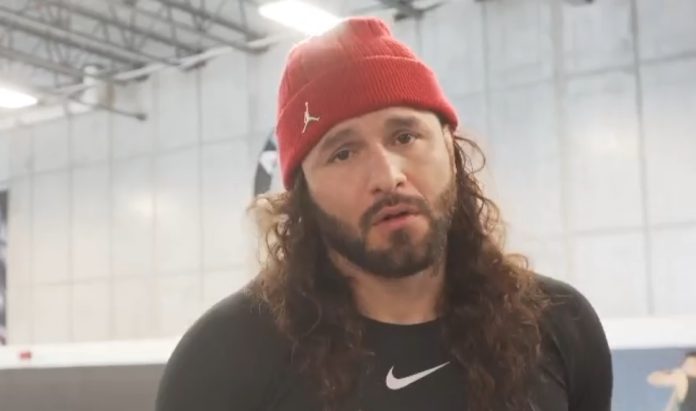 Jorge ‘Gamebred’ Masvidal has been arrested after his altercation with Colby Covington earlier this week.

Exclusive @GamebredFighter headed to jail on an aggravated battery charge after his alleged attack on @ColbyCovMMA Exclusive video and story on @WPLGLocal10 pic.twitter.com/HGJhTz25Kj

The arrest took place in the late hours of Wednesday night and Masvidal was charged with one count of aggravated battery in a mask resulting in great bodily harm(a fractured tooth and an abrasion on his wrist) and one count of criminal mischief($15,000 worth of damage to Covington’s $90,000 Rolex watch).

Covington pressed charges against Masvidal after the incident. The police report states that Masvidal ran up and struck Covington without notice while wearing a blue surgical mask and said “you shouldn’t have been talking about my kids”. Masvidal surrendered to police custody where his injured and stitched hands were photographed.

See reports and booking photo below for more details. pic.twitter.com/OkW6LbZQHn

Masvidal posted his $15,000 bail and was released within 24 hours. His attorney’s only statement reads, “Mr. Masvidal will allow this matter to proceed through the court and does not have any further comment at this time.”