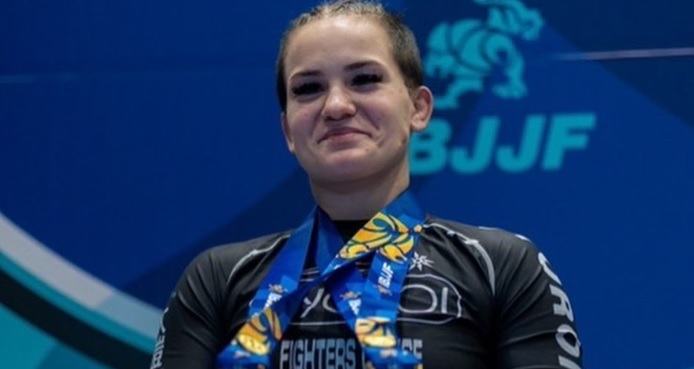 In the aftermath of ADCC 2022, this year’s IBJJF No-Gi Pan-American Championship saw standout performances from freshly minted Abu Dhabi veterans Elisabeth Clay and Giovanna Jara. Clay submitted her way through every opponent she faced to claim Pans double gold for the second year in a row. In an interview with FloGrappling, Clay says, “I feel good [winning all my matches by submission] especially because they were all chokes – I didn’t get anything other than chokes the entire competition, which makes me happy.” She aims to continue her win streak at IBJJF No-Gi Worlds in December.

Meanwhile, Jara also ran through her competition to win double gold at brown belt with seemingly effortless ease. Though open weight runner-up Amanda Bruse would ultimately take silver to Jara’s gold in the open class, Bruse gave a standout performance in her own right. After clinching gold in her weight class with five submission victories, Bruse squared off against Jara in the finals of the absolute. Bruse lost a hand-fighting battle to Jara early on in the match, which gave the eventual double gold champion the momentum she needed to rack up points on Bruse over the course of the scrap. However, Bruse refused to go down without a fight, forcing Jara to go the distance of the full eight minutes without a submission victory.

For some high-profile competitors who missed out on Abu Dhabi this year, Pans gave them a chance to prove their mettle. Fan-favorite Jacob “Hillbilly Hammer” Couch – after losing out on a spot at ADCC this year – took double gold in brown belt at Pans with a monstrously dominant performance, submitting five out of six opponents. Afterward, he told reporters from FloGrappling, “After I had to sit in the stands and watch the ADCC go by without me being a part of it, or me being a competitor in one of those divisions, it hurt – it hurt very deeply, and it was a huge growth experience for me. So ever since then, I’ve just tried to be on my s**t, focused, trying to be a better listener so I can become better as an athlete, and a person, and a friend.”

“Just watching [ADCC], I was like, man, I felt like I could have been in there, but it just makes me want to get better,” he added. “Because, like Mo [Jassim] always says, you’ve got to earn your spot, so I’m trying to vie for my value, and trying to earn my spot as one of the top-ranked in the sport. So, to do that, winning double gold is a pretty good boost.”

Pans also played mainstage to the highly-anticipated return of Legion Jiu-Jitsu’s legendary Keenan Cornelius, after the squid guard wizard’s noticeable absence from major tournaments for the past couple of years. Though Keenan ultimately lost at Pans this time around, he appears to remain optimistic about his odds of success in future competition.

In a video posted to his YouTube channel, Keenan, reflecting on the loss, blames his own technical errors rather than any physical conditioning pitfalls, explaining, “It was my first tournament back in a few years, and [the loss] was entirely my fault. I trained really hard for this – I’m actually in very good shape right now, very conditioned – my mistakes were entirely technical and strategic, which is good, because it means that I have a lot that I can do to improve and do better next time.”

“I had a great time, it was great to feel that environment again, to deal with the nerves, to deal with the fear, and to do it anyways,” he added. “Jiu-jitsu’s given me so much in my life, and I’m happy to still be here and able to get out there on the mats – and of course, it feels shitty to lose, but I’ve been losing my whole life. You have to lose, so that you can learn how to win.”

It’s a useful takeaway for a talent-infused tournament, where not every gifted athlete gets a place on the podium – and bodes well for performances at future competitions.