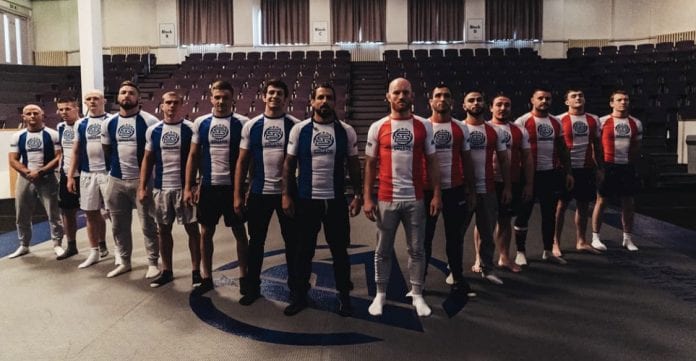 The first Polaris Squads event was an action-packed series of matches among some of the top competitors out of Europe. With a unique ruleset that highly encouraged competitors to go for submissions, the promotion saw some intense scrambles and submission attempts as athletes from both teams tried to get the taps they needed to score points for their respective teams. In the end, Team UK & Ireland edged out the win over Team Europe.

ADCC medalist Ffion Davies wasn’t part of the team portion of the competition, but Polaris did find her a superfight with Magdalena Loska that took place halfway through the event.

Loska jumped guard to start the ground-game action for the match, and after the competitors went to the mats, Davies used a knee-slice pass to get to side control. Davies then transitioned to the back, getting one hook in and then working in the other before trying to use one leg to trap one of Loska’s arms. Davies then put her hooks back, slipped in the rear-naked choke, and got the tap with 6:46 left in the match.

After an exciting first half that saw most competitors eliminated after their matches resulted in a draw from no successful submissions, Team UK & Ireland were one point ahead of Team Europe following a submission from Tom Halpin over Dinu Bucalet. The score remained the same going into the final match of the evening, which saw Ash Williams face off against Bucalet.

Williams rolled away from a slick takedown attempt from Bucalet, then went for a takedown attempt of his own, ending up in guard. Bucalet wasted no time in trying to pass, practically leaping over Williams to take his back and then ending up with a tight armbar attempt that Williams tried to roll out of. The competitors rolled out of bounds, and the referee reset them neutrally due to the fast scramble that they were in the middle of.

After some standing wrestling, Williams jumped guard with a guillotine hold, and Bucalet tried to latch onto a guillotine of his own, but it was largely ineffective as Williams moved to side control. Though Bucalet tried to escape, Williams kept the pressure on until Bucalet was finally able to create some space and bring the match back to the feet with about a minute left to go. Williams made a flying triangle attempt and quickly transitioned to mount as the competitors went to the ground again.

With about ten seconds left, Bucalet managed to reverse the position, and despite his fast and aggressive attempts to pass Williams’ guard, neither competitor was able to submit the other before time ran out. The score remained the same, and Team UK & Ireland took home the first Polaris Squads win. 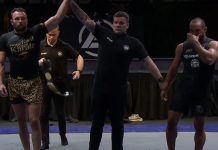