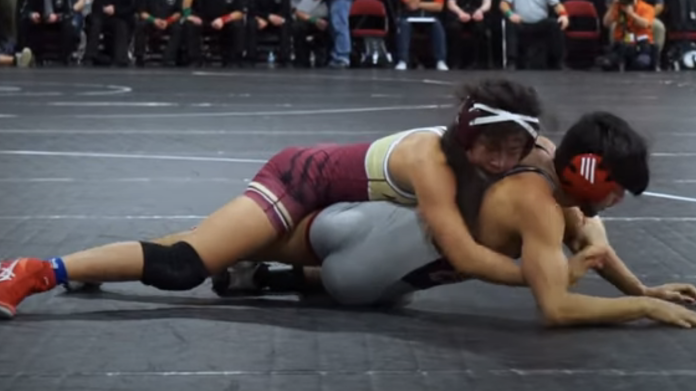 June Welch of Woodruff, South Carolina became the first female in South Carolina High School League history to win a State Wrestling Championship as she took home the Class AAA 106 lb. title. And she did it as a sophomore.

Welch comes from a jiu-jitsu background but has been wrestling since the 5th grade. She told the Spartanburg Herald-Journal, “Wrestling helped me with my takedowns in jiu-jitsu,” Welch said. “Eventually, I started to like wrestling more… I wanted to win the whole thing when we came here. Winning my semifinal match made me want to win more.”

Her final match was against Eduardo De Paz of Chester, SC. The pair had competed against each other just a week earlier, with De Paz defeating Welch by pin.

Her coach, John Harper, also spoke with the press, “When a girl wrestles a guy, a lot of people look at the match as a girl wrestling a guy… June is a wrestler. She approaches it like anybody else… [her win is] a great thing for women’s wrestling in the state of South Carolina… Again, these girls are wrestlers. All the girls you saw here, they are all good wrestlers. They all work very hard. They just want to get better and improve.”

As of the 2017-2018 wrestling season, there were only 6 states in the U.S. to sanction women’s wrestling for high school athletics. In the other states, women must compete in their respective weight class among the boys, as Welch did.

If she can continue to dominate her division for the next two years of her high school career, I can guarantee that South Carolina will be considering a women’s wrestling league.