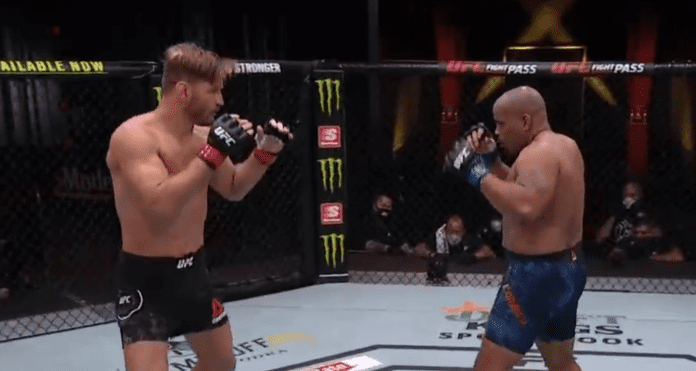 Stipe Miocic has defended his UFC heavyweight title against his legendary rival Daniel “DC” Cormier at UFC 252 in Las Vegas, Nevada. The former-to-current champion ground out a close decision victory over five hard rounds, the end of which saw many crowning him the greatest fighter his division has ever seen. The end of their trilogy also gave us the possible retirement of Cormier, closing the book on one of the most illustrious careers in combat sports period. But before all of that, we gotta unpack this behemoth.

It all comes down to the fifth and final round 🏆 #UFC252 pic.twitter.com/jiCVH1xg69

Both champions start their third encounter cautiously, with exploratory leg kicks and jabs . DC got in early with a high crotch takedown, and maintained head and arm control on a standing Miocic to land some knees. Freed, Miocic retaliated with big combos and continues the body shots that won him their last fight. Evolving, Miocic also uses the body shots to set up punches to the head as DC goes to defend. None of this fazes the Olympian, as DC fakes takedowns to start landing big overhand rights on the man from Ohio. One of these big shots seems to wobble Miocic as the round ends.

Accidental nut shot aside, Miocic starts much more aggressively in round two. The champ lets his hands fly but DC sticks to the fake high crotch to land big rights. Miocic starts to wilt under the pressure as DC abandons wrestling to simply unload combinations. But just before the bell, Miocic bobs and weaves his way into two big right hooks that floor DC and give Miocic time to land some ground and pound before the match ends.

Round three begins and DC is definitely not all there. The wrestler looks sluggish from the last round as the fresher Miocic gets in jab after jab before forcing DC against the fence. But DC takes deep breaths as Miocic rests against the cage, and regains enough composure to free himself and retaliate the rest of the round. Unfortunately a grizzly eye poke from Miocic at the end of the round blinds DC’s left eye, and goes unnoticed by the ref before the bell rings.

You couldn’t immediately tell DC was half blind, as the man pounced like a tiger to land vicious combos early and swarm Miocic. Mixing in some kicks, DC starts to fade mid round as Miocic presses him against the fence and peppers in some jabs. Aside from a big 1-2 from DC at the end, the round looks to be for Miocic.

A warm embrace kicks off the final round, and a belabored DC picks up his shield for what could be his last five minutes of professional MMA competition. Miocic mixes in front kicks to cap off his combos, gaining distance and setting up his next attacks. He follows by pressing DC to the cage whenever he tries to counter, and continues to throw in jabs every moment to maintain control. Breaking free, DC and Miocic exchange beautiful punches in the pocket before Miocic goes in on a doomed single leg. Both men exhausted, the match ends with both raising their fists convinced of their own victory.

EVERY PUNCH ON THE EDGE OF OUR SEATS!

But as we’ve all learned from Highlander, “There Can Only Be One.”

After failing to regain the belt, an emotional but composed Daniel Cormier confirmed suspicions of his retirement. “That’ll be it for me,” DC said. Stating he’d only fight for a title and admitting that possibility was unlikely, the future hall of famer appears to be done for good. He retires with a record of 22-3-1NC.

🐐 Stipe Miocic is the greatest heavyweight of all-time! #UFC252 pic.twitter.com/m5Xu2mxxsT

Miocic conversely is one defense into his second reign as UFC heavyweight champion. Coming in victorious in his trilogy with one of the greatest of all time, his claim to MMA goat-hood has never been greater. Hopefully for Miocic he can weather the storm of challengers set to storm his castle. His record stands at 20-3.