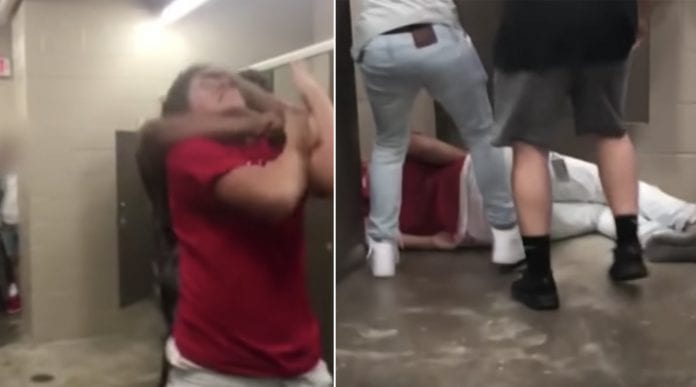 Bottom Line: Never turn your back on an opponent until the fight’s over.

A teenager in New Caney, Texas, learned this #fightlife lesson the hard way when he reportedly agreed to a “slap boxing” match to settle an argument with a peer. The boy, identified as Sabian Brown, planned to slap some petty beef out with another student in the bathroom of the stadium where he and friends were attending their high school homecoming game. In case you’re not 16 anymore, slap boxing matches are limited to open hand strikes only.

When his opponent violated these unofficial rules and started grabbing him during the fight, Brown turned away in what he describes as an effort to shut the whole thing down. That’s when he got hit with a rear-naked choke and squeezed into unconsciousness. Friends reported that he was blacked out for several minutes before eventually being shuttled to the ER.

This otherwise standard teen brawl made the Houston news because Brown’s mother, Ruby Rodriguez, is outraged that her son–the victim of an assault, as she sees it–was given the same punishment by the school district as the boy who issued the submission. Both boys were sentenced to 30 days of “disciplinary schooling” at The Learning Center, a school used to punish kids with behavioral issues. Rodriguez feels her son is being unfairly treated and has kept him home from the program for over a week, prompting the school district to threaten her son with expulsion for absenteeism.

“Thirty seconds more [my son] wouldn’t be here to talk about it,” Rodriguez told KHOU11, “and I feel like I’m the only one that sees that from the school district.”

Rodriguez also stated that she wants criminal charged pressed against the other student, though a juvenile prosecutor who reviewed the case found no reason to pursue charges at this time.

Real talk: There’s no way to not feel bad for Brown at this point. Not only did he get choked out in a slap fight, but now he’s on the news for losing a slap fight and facing expulsion because of his mother’s position on his loss. Few things chip away at developing manhood like your mom on the local news demanding criminal charges cuz you failed to win a shithouse boxing match.

But given the proliferation of MMA moves and chokes in teen fights during this mixed martial arts renaissance, it does raise a question: If you were the school district, what would you do? If two kids consent to solve a problem via combat, and one breaks the rules to win, are both equally at fault? (If no one is injured, obviously.)

Or is possibly losing to a cheater what you sign up for when you decide to handle things through non-mortal combat?

The video of the fight is below.

Either way, we feel for you Brown. If anyone in Texas wants to give this kid’s esteem a boost with some free BJJ lessons, now would be a great time.