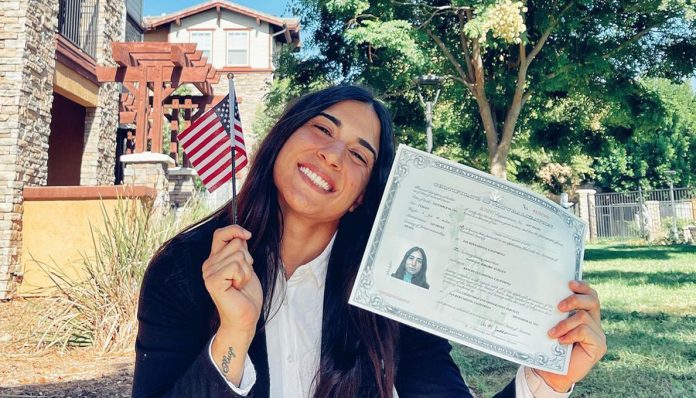 Tata Ribeiro is a mom, a multi-time World Champion competitor, and now, officially a US Citizen.

The BJJ-black belt under Lucas Leite has had an illustrious career with many setback. Born in Brazil to a family of jiu-jiteros(including her black-belt father), she began training at the age of 8-years old and received her blue belt at 17. However, she had a baby that same year which led to a hiatus of a few years.

She later earned her purple belt from Master Sylvio Behring‘s academy, and then her brown belt while training with master Aloisio and João Silva. She later met Leite, who made her an instructor at Checkmat La Habra and ultimately promoted her to black belt in 2018.

Her journey through jiu-jitsu is only a part of her life’s story, and as she achieved her most recent accomplishment, she gave us a brief view into her personal life via an Instagram post,

“And I can finally say that I am proud to be an AMERICAN 🇺🇸 in March of 2015 I arrived in US with not much of expectations and afraid of what was coming. Six years later after ups and downs and a lot of hard work I became an American citizen. I am grateful for everything Americans gave to me, I found myself here, I was a girl in Brazil who was always afraid to do anything by herself and here I became a woman who built her own fate. I will never forget my roots and where I came from but I will ALWAYS be grateful to the place where made the person that I am today.

And from now on I will proudly represent USA in any aspect, and I will work very hard to make the Americans proud.

I want to thank all the people that helped during this journey, all my friends and family without you guys I wouldn’t be here, and I will never forget anyone who helped me here ❤️