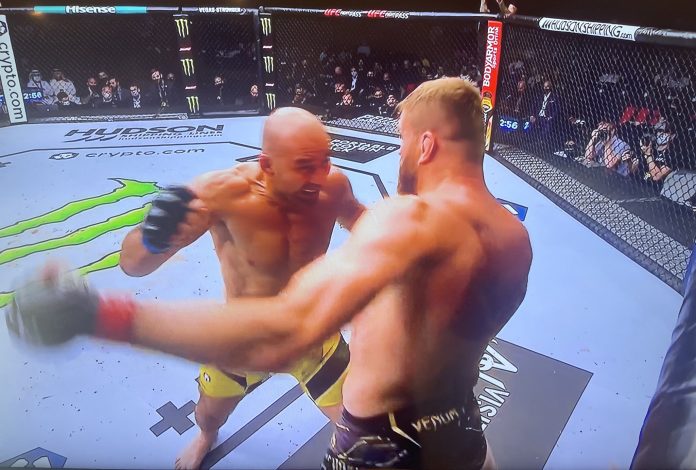 An exciting night of fights was capped off by a historic win from Glover Teixeira as he becomes the 2nd-oldest UFC champion in history.

An RNC got him the title, but it was an early takedown that gave him the momentum in Round 1. Teixeira ended up in Blachowicz’s closed guard, and Teixeira used a nasty Can Opener while inside of the closed guard, taking breaks to pepper away with some ground and pound for the entirety of the round. Blachowicz, who has been training his jiu-jitsu with Braulio Estima, clearly didn’t enjoy being on his back, as he hasn’t been taken down in the UFC since 2016.

In round-2, Teixeira secured another takedown, then passed to the mount and took Blachowicz’s back. From there, he flattened Jan out and finished him by way of RNC.

Petr Yan and Cory Sandhagen went the full 5-round distance in their bout for the Interim Bantamweight Title fight. Yan got his title back, and will now have a rematch against Aljamain Sterling is about to unify the Bantamweight titles. Their rematch comes after Yan lost their last fight by DQ due to an illegal knee from Yan while Sterling had a knee on the ground.

Also in the main event, Islam Makhachev nearly broke Dan Hooker’s arm with a Kimura in his first-round victory. Shortly before that, Khamzat Chimaev made a splash as he gave a mid-fight speech during his RNC win over Li Jingliang, which led to Jingliang going to sleep.