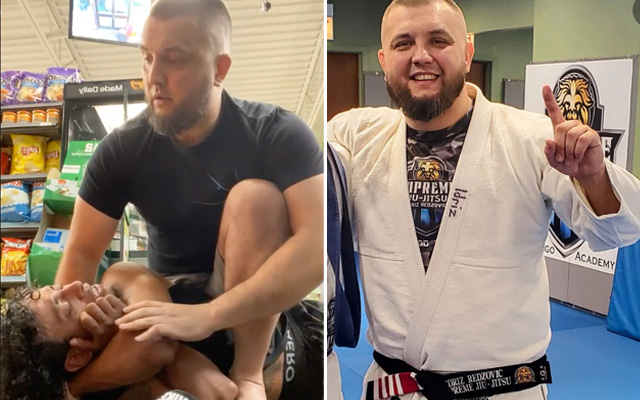 A 3rd-Degree Gracie Black Belt and professor of Brazilian Jiu-Jitsu was there to take down a man who he says assaulted a 7-Eleven worker, and then held him until the police arrived on scene.

Idriz Redzovic posted a video of the encounter to Facebook, which begins with Redzovic already on a gift wrap from full mount. He turns his camera on and props it up, telling the man, “I’m putting you on camera, if anything happens.” As the man pleads to be released, Redzovic tells him that he’s not letting him go because he swung at the 7-Eleven employee. The man seems to be extremely intoxicated and doesn’t recall the situation, continuing to try and convince Redzovic to let him go.

From there, nothing really happens except for a bit of back-and-forth negotiating between the two. It isn’t until about the 6-minute mark of the video when the man decides to switch his tactics from verbal negotiations to physical as he tries to muscle himself free. During the struggle, Redzovic stays calm and maintains his grips. A rapid hip-bump from the man on bottom is useless against the solid mount of the BJJ professor, with Redzovic calmly tells him, “I’m gonna choke you out and it’s gonna get worse.”

The police finally arrive around the 13:30 mark, where Redzovic rolls the man over, flattens him out onto his stomach, and says, “I’m gonna make this real easy for you guys,” before passing his position off to the officers and letting them know, “I do jiu-jitsu, so…”. The police then put the man in handcuffs and took everyone’s statements.

“#CHICAGO He assaulted  a 711 employee, so I jumped in and took him to the ground and did a gift wrap hold which is taught in the art of Jiu-Jitsu until the police showed up and arrested him . Alhamdulilah aka All thanks to God for keeping me safe and guiding me to learn the art of Gracie Jiu-Jitsu.

*🙏👉Here’s a little back story to the incident, I was getting slurpess for my kids and a lady came in complaining about the individual In this video. I look outside and her friend was driving around wrack less trying to hit him with the car and he was slamming his hand on her car teasing her and saying crazy stuff. I was not sure if they knew each other because she seemed to be on something her self as well. I told her to jump in the car and just leave. She  snapped at me for saying that to her. Then she took some windshield fluid  and slammed it on my own car in front trying to open it. I got her off.

Then I called the cops on both the girls and the guy. I stood back minding my business. Then the guy runs up on me talking crap and then said: are you Russian and tried flexing on me trying to pretend like he was going to swing at me and I took a step back and didn’t engage. Then he walked into 711 messing with the employee as I was standing outside just watching and waiting for the cops, which I called like a few mins back.  

Then I saw him swing at the 711 Employee that’s when I jumped in to control him til the cops came.

I went live to make sure nothing went on and I had witnesses to have my back. We live in the age of technology why not use it for good. People can learn from this footage that violence is not the answer. Get proper training, like I have and the world can be a better place. I never harmed the guy and wish him the best and hope he changes his life around for the better. Maybe seeing this video might be a wake up call for him. The cops probably would of came in and tased him or pepper sprayed him to arrest him. What if he would of hurt the employee really bad and then been locked up for a long time  . Someone else might of killed him and he wouldn’t be there for his kids. He could of got hit by a car the way he was acting. I really wish him the best and maybe we can grab some food in the future.

This is another reason why people shouldn’t drink Alcohol or take drugs. I don’t drink because of my faith I am a Muslim and that’s why I was so calm because my faith and my 20 plus years of teaching and training Jiu-Jitsu. It was not easy for me to leave because they were driving wrack-less and almost hit my car a couple of times. To much to say.