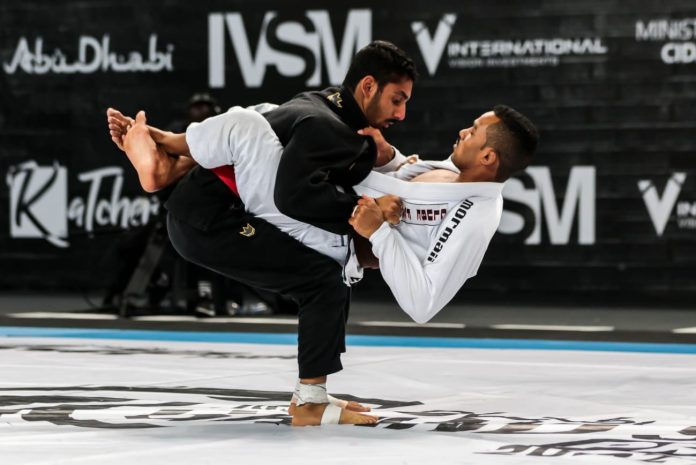 The second day of action in Rio was dominated by the young talents of the purple belt and the brown belt in the Professional Division. On their way to become black belt stars, the men and women that entered the mats set at the Arena Carioca 1 took one more step towards greatness.

Athletes from all over the world came together in Rio for a full day of thrilling matches. The nationalities present in the brackets reinforced the ADGS as the most influential event in Jiu Jitsu today.

The UAE’s Khaled Mohammed Alshehhi won the Professional Brown Belt Featherweight division (-62kg). He was pleased with his performance: “Today, thank God, I won the gold medal. I am happy with it. I want to thank our Sheikhs in Abu Dhabi for their support in achieving this goal.”

From Brazil, Pedro Ribeiro smashed his opponents in the Brown Belt Super-heavyweight division (-120kg). He also spoke about his accomplishment: “This victory is the result of lots of hard work and dedication. I want to thank all my team. I couldn’t do it without them.”

Here’s how each weight division played out.

They are one step away from the pinnacle of the sport. The brown belt division is the stepping point for a career of international star as a black belt Jiu Jitsu competitor. In Rio, the crowd witnessed some of the most promising talents in the circuit today. Here’s how each champion got their gold medal.

Light-featherweight (-56kg) – Everton Souza had a long way to the gold medal. He fought four times in Rio. First he beat Bruno Sena 2-0 and then Welison Fernandes 1-0. In the semifinal, Everton defeated Antonio Neto in a thrilling match that ended with a 6-3 lead. In the gold medal match, Everton built a 8-3 lead to outscore Relter Filho and take the title home.

Featherweight (-62kg) – It’s never easy to win in Brazil as a foreigner. Khaled Mohammed Alshehhi took no prisoners and won the gold medal in five matches. He finished Russia’s Yaroslav Rudenko, finished Argentina’s Martin Gonzalez, beat Brazil’s Gabriel Costa 2-0. In the semifinal, a tough match against José Lima and the win came with a 6-5 lead. The title came with a 3-2 lead in a close match against Jonathan Santos.

Lightweight (-69kg) – With 38 competitors, the division was an absolute marathon. Lucas Silva fought five times to secure the gold medal. He beat Giovanny Nascimento 5-0, Jefferson Fagundes 2-0, finished Nikolas Ramos. In the semifinal, Lucas caught Arthur Carvalhães to make it to the final. The gold medal came to Lucas for scoring last in a 3-3 tie with Carlos Henrique.

Middleweight (-85kg) – In four matches, Alehander Mariano made his way to the top of the podium. He finished Dorgivan Jesus and outscored Anderson Marinho 5-1. In the semifinal, another win via submission over Egypt’s Saif Mohammad. The gold medal became reality with a 7-4 win over Paraguay’s Maurício Cespedes.

Super-Heavyweight (-120kg) – Pedro Ribeiro faced four tough opponents on his way to the title. He beat Robson Chaves 3-0, Learsi Souza 8-0 and Gabriel Barbosa 1-0. In the final, Pedro faced a tough opponent in Helder Rodrigues Junior. A narrow 3-2 lead took Barbosa all the way.

Competitors of many nationalities entered the arena to compete in the Professional Purple Belt Division. They showcased skills and the desire necessary to become champions at the highest level of competition. Brazil, the UAE and Colombia had the best showings. Here are the champions.

The Abu Dhabi Grand Slam Rio will have its Grand Finale this Sunday, July 31. The aces in the Professional Black Belt Division will take the stage at the Arena Carioca 1. Matches kick off at 10:00AM (GMT+3). Click here for the complete results of day 2. Watch all matches live on ajptour.tv. Follow the complete coverage on our Instagram.