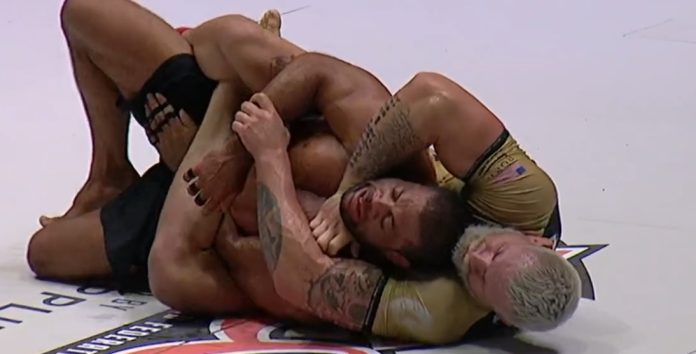 ADCC 2022 has been one of the most star-studded events in the tournament’s history – so it follows that it’s also seen an astounding number of upsets. Saturday was full of first round defeats for many favorites in their brackets, including Tye Ruotolo at the hands of Atos teammate Josh Hinger at 88kg, and the wildly favored Cole Abate to Fabricio Andrey at 66kg. Haisam Rida also secured a rapid submission victory over Roberto “Cyborg” Abreu in just over one minute at 99kg. Previous reigning king of 77kg JT Torres was out by his second round, thanks to PJ Barch’s well-timed guard pass.

We’ve also seen some incredible performances from relative underdogs deep into the semis, with Amy Campo, for example, winning a stunningly decisive last-minute victory over the 200-plus-pound multiple-time ADCC champion Gabi Garcia, and Nicky Rod denying Felipe Pena his rematch against no-gi king Gordon Ryan with a defeat via points thanks to a hard-won guard pass.

Meanwhile, in the lighter women’s division, both the arguable divisional favorite “lady GOAT” Bia Mesquita and 2019 ADCC champion Bianca Basilio found themselves squaring off in a highly aggressive bronze medal match after being knocked out of finals, respectively by Ffion Davies and Brianna Ste-Marie. Mesquita ultimately found her way onto the podium via a brutal submission from the back.

It’s all made for an explosive series of finals that’s resulted in a reign of brand new champions in almost every division. Let’s get into it, shall we?

Performing precisely as expected, Gordon Ryan locked in an early heelhook on former teammate Nicky Rod in just over two minutes to claim his ADCC gold – as predicted by most fans and betting odds.

Poor Craig Jones is a legend of the sport who’s come achingly close to ADCC gold in the past, only to lose out in the finals – which, unfortunately for Jones, is exactly what happened in his gold medal match against Kaynan Duarte, who ultimately claimed the crown via points.

Giancarlo Bodoni battled  Lucas “Hulk” Barbosa via an aggressive, wrestling-heavy scramble that culminated in Bodoni achieving positional dominance and securing a rear naked choke on the Hulk – along with his 88kg crown.

In one of the most thrilling battles of the evening – between two of ADCC’s youngest competitors, no less – Kade Ruotolo captured ADCC gold from -77kg favorite and fellow teen phenom Mica Galvão via heel hook. In doing so, Kade caps off a perfect record of submissions through his 2022 ADCC run, avenges  twin brother Tye’s defeat at Mica’s hands in the Worlds 2022 finals, and makes history as the youngest champion ever crowned at ADCC.

The baby shark is all grown up! Diogo Reis – amidst a few strong but fruitless attempts at leg lock attacks – found his way to opponent Gabriel Sousa’s back, which ultimately earned Reis three points, along with the 66kg crown.

In one of the few ADCC gold medal matches in this division’s history without Gabi Garcia looming large as the defending champion, we saw Amy Campo – still riding high on her shocking underdog victory over Gabi – go to war against Rafaela Guedes. Campo ultimately earned a narrow, hard-fought victory with a score of 3-2 to become the new +60kg champion.

In another battle between arguable underdogs, Ffion Davies claimed her crown as ADCC’s first Welsh champion by defeating Canada’s Brianna Ste-Marie with a dominant victory via points at a score of 10-0.

This year’s absolute division represented an opportunity for redemption for several competitors. Notably, Tye Ruotolo, who’d previously suffered a disappointing defeat to teammate Josh Hinger at 88kg, fought his way all the way on to the podium at absolute. Tye cut an impressive swathe through his opponents, finishing Pedro Marinho with an arm-in choke on the back, and upsetting the much larger former ADCC absolute champ Felipe Pena via a narrow victory on negative points. Tye would ultimately fall to longtime IBJJF great and newly-crowned ADCC +99kg bronze medalist Nicholas Meregali via referee decision – but claim his own bronze medal in this division.

For the finals of the absolute, Meregali squared off against two-time ADCC champ Yuri Simoes. In a very close war between the two that went the full distance, Simoes eventually eked out the victory via the negative points Meregali accrued due to guard pulls.

This takes us, at last, to the final showdown of the evening.

Ah, the long-awaited war between the seemingly invincible Gordon Ryan and longtime ADCC king André Galvão. Despite an early double leg takedown by Galvão, Ryan ultimately found his way to Galvão’s back and, after several grueling minutes of hand-fighting, locked in a rear naked choke to earn his victory.

Although we’ve previously witnessed an alleged history of some acrimony, the two appeared to bury the hatchet at the end of their match, in a show of visible mutual respect: the competitors shared a long embrace, and Ryan briefly raised Galvão’s hand alongside his own. It was described by commentators as a “passing of the torch” from 39-year-old Galvão to 27-year-old Ryan.

Ryan is now calling out Felipe Pena – the man who made his name submitting Gordon Ryan via rear naked choke back in 2016 – with Ryan claiming a bit cheekily in an ADCC post-fight interview that one of his few disappointments from the weekend was that “I didn’t get to beat the f***k out of Felipa Pena.”

The submission grappling world being what it is, he may yet get his chance.