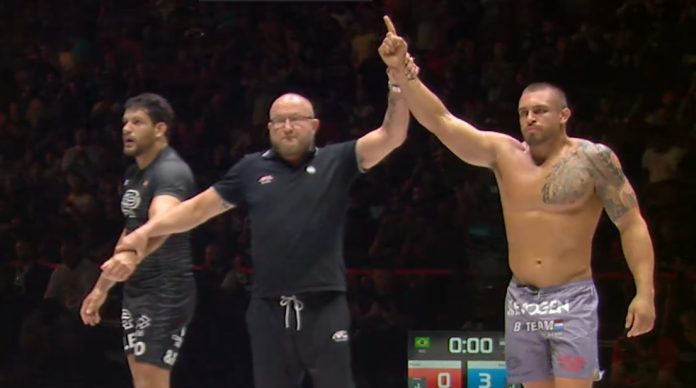 As soon as the match began, Pena sat to guard immediately. Rodriguez wasted no time looking for an aggressive bodylock pass, though Pena’s guard proved unsurprisingly difficult to penetrate. That seemed to embolden Pena, who teased Rodriguez by beckoning with one hand, seemingly inviting his opponent to press forward into Pena’s guard.

Rodriguez, however, appeared to remain hesitant – clearly savvy to the danger of engaging with Pena’s guard head-on. Instead, we saw a few attempts from Nicky Rod to force his way into Pena’s half-guard, a slightly safer prospect than battling it out with the full open guard. Pena, though, seemed determined to shut down those entries. Much of the ensuing battle consisted of the unstoppable force of Rodriguez’s ongoing bodylock pass attempts colliding with the immovable object of Pena’s defensive open guard game.

The tide finally began to turn around the five-minute mark, when points came into play. Immediately, Rodriguez, attempting to pass from the knees, forced his way into the half-guard he’d been hunting earlier, and momentarily flattened Pena out. Pena, sensing danger, responded by framing out, prompting Nicky Rod to stand again. As soon as Rodriguez closed the distance, though, Pena wrapped his arms into a shoulder crunch on his opponent from guard, cutting an aggressive angle.

Nicky Rod successfully disengaged, hopping back to his feet, where he once again launched an exhausting onslaught of bodylock pass attempts. At the 3:30 mark, one of Rodriguez’s bodylock attacks finally cut through Pena’s seemingly impassable guard. Pena, clearly realizing that Rodriguez was about to score, fought desperately to re-guard before points appeared on the board, but Nicky Rod was having none of it. Deftly, he slid around to the north-south position, collecting his three points for the pass, before standing and forcing Pena to re-engage on the feet.

This time, Pena appeared hesitant to pull guard again, and began cautiously engaging with Rodriguez’s wrestling – though the ref did warn Nicky Rod, who was ahead on the scoreboard, to push the pace. In the final thirty seconds, Pena – in a possible Hail Mary – finally pulled guard again, though his inability to secure a quick submission from bottom prompted both athletes once again to their feet. The final ten seconds saw a desperately aggressive wrestling exchange. However, Pena was ultimately unable to recoup those three points, giving Nicky Rod the victory.

Nicky Rod now moves on to the finals at 99kg to face Gordon Ryan.