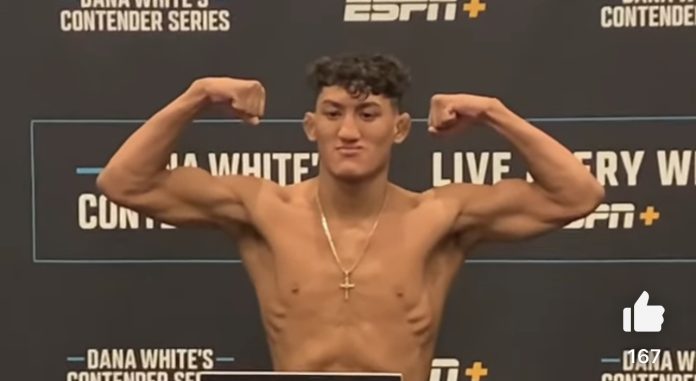 The day has arrived. Raul Rosas Jr. – whom the Jiu-Jitsu Times previously spoke to back in August – is officially making his debut tonight on Dana White’s Contender Series. Rosas, thus far an undefeated teen phenom, is slated to face off against 25-year-old Mando Gutierrez, who’s currently riding a three-fight win streak.

In a video interview with MMA Junkie, Rosas states, “Since I was little, I knew what I wanted. I know what I want and I’m going to get out there and get it.” After all, as he’s explained to multiple news outlets, he’s been fighting – and beating – grown men since he was fifteen. He’s even obtained a special license to allow him to compete for his UFC contract, despite being under the age of eighteen.

Meanwhile, in an interview with MMA Weekly, opponent Mando Gutierrez describes young Rosas as a “savage” who “definitely deserves to be there.” However, Gutierrez also appears to remain confident in his own chances at victory, per MMA Weekly reporter Mick Hammond: “I think Raul poses a big threat on the ground. I feel I have just as much ground game as he does to bring to the table. I think it’s going to make for a great fight either way –whether on the ground or the feet – but I see myself as the better fighter all-around.”

Catch all the action on tonight’s episode of the Contender Series at 8 PM EST via ESPN+.