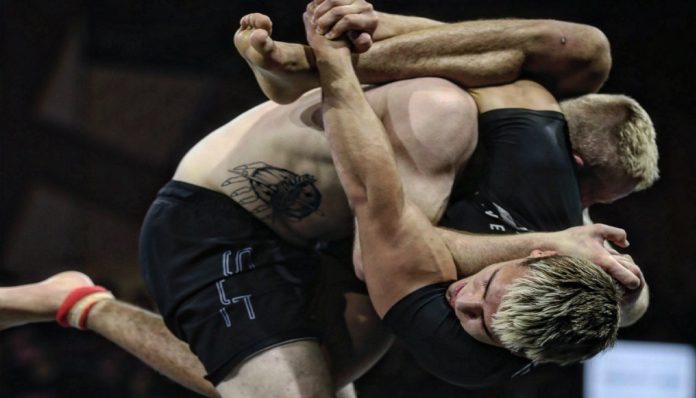 This round of ADCC West Coast Trials turned out to be the organization’s biggest trials ever, with more than a thousand competitors and thousands of people showing up in attendance.

There were some major stories that developed from the trials, such as B-Team’s Jay Rodriguez’ gold medal win in the 88 kg division as a blue belt – with a buggy choke. The younger brother of Nicky Rod, he secured 6 submissions out of 7 matches and earned his purple belt from Craig Jones after winning the final.

10t Planet’s Keith Krikorian earned his ticket to ADCC Worlds with a finals victory over the notable Josh Cisneros. An ADCC Worlds veteran, this was Krikorian’s 4th appearance in the Final Round of the qualifiers. He won 7 matches total, earning a heel hook victory nearly 3-minutes into his final match.

Kyle Boehm, another 10P product, took home gold in the 99+ division, and a few quick submissions with it. Paul Adilla won the 99kg division with a series of very fast heel hooks against some of the division’s hardest competitors, earning his 2nd ADCC qualifiers Gold medal. Checkmat’s William Tackett earned gold in the 77kg division after winning 7 matches in total. He was 5 for 5 on submissions going into the semi-finals, then outscored his next two opponents to punch his ticket to Worlds.

In the Women’s division’s Brianna Ste-Marie entered as the #1-seed in the -60kg division, then took home the gold with 6 straight wins. As she also won the East Coast trials in 2021, Ste-Marie now became the first woman in ADCC history to win both East and West Coast trials. Amy Campo, the Eduardo Mori black belt with more than a few gi and nogi world titles on her resume, won gold in the +60kg division with an inside heel hook.

The event was one of the most successful in the organization’s history. Head Organizer Mo Jassim delivered on all promises for the West Coast Trials expectations. After the event, he mentioned via Instagram live that the attendance had outgrown the arena, that next time they may need to move to a full-on stadium. As they’ve now signed a sponsorship deal with the largest podcast in the world, the Joe Rogan Experience with more than 11 million listeners per episode, the ADCC is continuing its upward trend and growing massively.

For a full list of clips of FloGrappling’s ‘The Must-See Matches From West Coast Trials’, visit the link here.