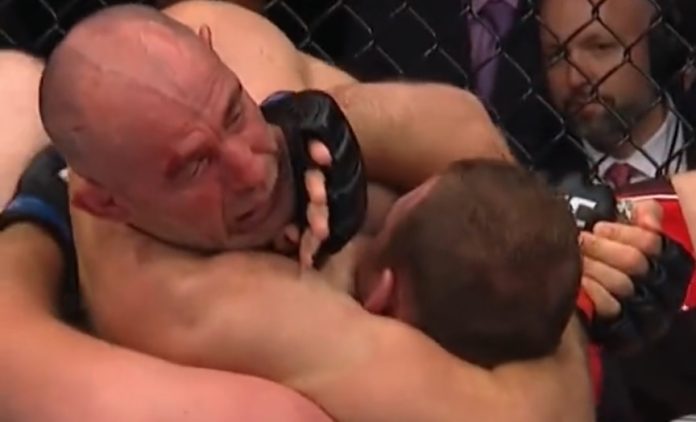 win and 47th career submission at UFC 273 on Saturday night.

Oleinik walked out to his 77th professional MMA fight to a swarm of boos from the Florida audience as Bruce Buffer announced that he was fighting out of Moscow, Russia(although he was born in Ukraine). By the end of the fight, he had the crowd roaring in his favor.

His opponent, Jared Vanderaa, looked humongous when he entered the octagon, as he had to cut weight to make the 260 lb. heavyweight limit. He’s proven to be a threat in the division and just came off of a split decision loss to former heavyweight champion Andrei Arlovski.

The two traded blows early in the first round, and Oleinik landed a few of his unorthodox bombs right from the start. Ultimately, Vanderaa’s striking was proving to be a bit more effective. When Oleinik clinched and pulled guard, Vanderaa was able to take the back and come into mount, transitioning to a triangle. For a moment, it looked like it could be the end for Oleinik.

But then the tide changed.

Oleinik got a hold of Vanderaa and took the back, at this point the grappling advantage was clearly in Oleinik’s favor. Oleinik briefly transitioned into mount before further advancing into scarf hold and got the tap with catch-wrestling style neck crank with 1:21 left in the first round.

After the fight, Joe Rogan asked how long he plans to keep fighting. Oleinik joked, “Not too much. Maybe 5, 10 years.”