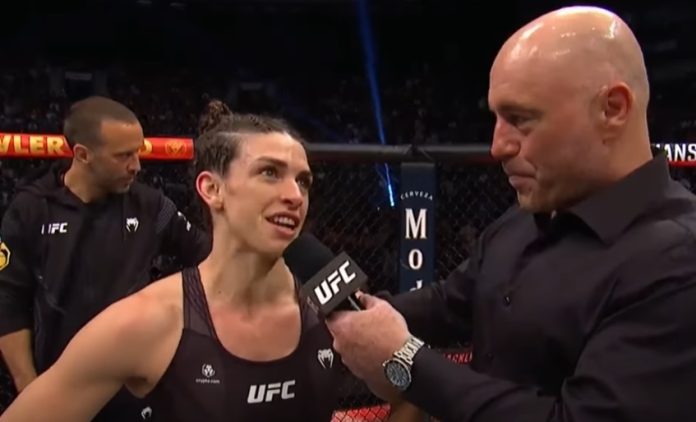 World Champion grappler Mackenzie Dern had her hand raised via split-decision after a grueling 3 rounds against Tecia Torres.

Torres was relentless with her kicking, accumulating 32 leg strikes in total and taking the lead in overall strikes landed with 76 over Dern’s 50.

The second round is when Dern’s grappling truly stood out, as she jumped guard and locked up a nice kimura with Torres’ arm completely behind her back. Unfortunately, Dern couldn’t get the right angle for the finish, but used the position to maintain a clinch, move to the legs, and almost finished a knee bar and toe hold. While she couldn’t get the tap, she was able to maintain control on the ground for most of the round.

Some fighters disagreed with the split-decision victory going in Dern’s favor.

Dern’s record improves to 12-2. After the fight, she told Joe Rogan that she’s looking for an opponent in the top 5 next.

🔒 @MackenzieDern locks in the SD victory after going the distance!