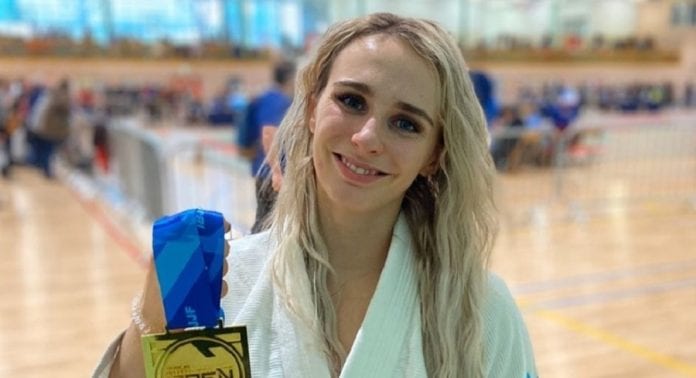 As the UK continues to establish a firm foothold in the professional grappling world, a new promotion called Enyo is setting out to put the region’s female grapplers in the spotlight.

With Joanne Wellstead (of Rainha Fightwear) at the forefront of this endeavor, Enyo — named for a goddess of war in Greek mythology — is set to make its debut on August 20 of this year with fifteen matches on the card. And headlining the whole thing will be a match featuring none other than Ffion Davies.

Davies, a highly decorated grappler with an ADCC silver medal and multiple No-Gi World Championship titles to her name, will be facing off against Poland’s Zofia Szawernowska, who took home bronze at Euros earlier this year. Szawernowska, a sports psychologist, earned her black belt less than a year ago after collecting a number of titles in the lower belt ranks. Though she is undoubtedly the underdog against an opponent of Davies’ caliber, her competition history has proven that she’s always hungry for a challenge. Davies is sure to give her just that, making for a can’t-miss main event.

In a press release sent to the Jiu-Jitsu Times, Wellstead says that the event has been “a couple years” in the making, with its debut being delayed due to — you guessed it — COVID-19 and the related restrictions. Now, the time has finally come for Wellstead and the rest of the Enyo team to give Europe’s female grapplers the attention they’ve always deserved, but don’t always receive.

“The last six to eight years have seen a boom to not only female participation within Brazilian Jiu-Jitsu and other grappling sports, but somewhat of an explosion of amazing female talent competing at the highest level. However, this rise in visibility, participation, and success has not translated to adequate representation on major grappling shows,” says Wellstead. “We created this event to showcase the incredible skill, technicality, and talent of the women in the sport, but also to draw a line in the sand and show that women’s grappling sells seats. That the athleticism and technicality typically on display in female matches is enough to draw an audience, not just the names of women who have proven themselves exceptional at the highest levels of competition, but home-grown up-and-coming talent also.”

It’s not just women in jiu-jitsu who are throwing their support behind the event, either. “The level of support and interest we’ve received from men in the sport who are keen to get involved and help where they can has been overwhelming,” says Wellstead. “So we will have a mixed commentary team in the form of Vanessa English and Dan Strauss, a mixed judging panel, and mixed floor staff.”

As the promotion gains traction and grows, Wellstead says that purses will grow with it. Even for the show’s debut, though, winners at the purple belt level and above will take home prize money.

With fifteen matches on the first Enyo show and many, many more athletes keen to compete at subsequent events, the rest of the world will soon be made aware of the abundance of skill that women’s grappling in Europe has to offer.

Enyo will take place on August 20, 2022, in Southampton, UK, and can be streamed live on FightWorld.